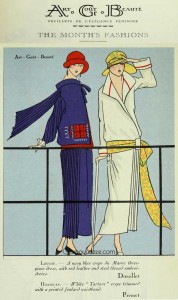 “PARISIAN dressmakers are to be pitied! The foreign buyers tell them that they are short of ‘new’ ideas, and that they have been playing with variations on the same air for the past three seasons. Buyers were expecting a real revolution in dress this summer, and it hasn’t come!

The reason being – that Parisiennes and smart New Yorkers will persist in wearing the narrow style of dress that looks so young and sets off slender and graceful figures so admirably.

This it is, in spite of attempts to revive the 1830 Louis Philippe and Second Empire styles, in spite of the wide dresses made by Paul Poiret, the dressmakers in general have to comply with their customers wishes – and embark on the task of making something ‘new’ out of what has been seen over and over again.
The reign of La Garconne and with it – the narrow skirt continues despite numerous attempts to introduce some more feminine flounces.

Parisians look to Cannes for the latest modes in summer. 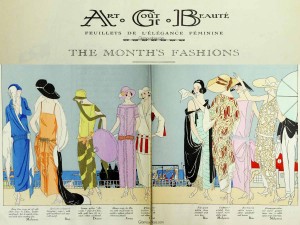 We are now at the very height of the season on the Riviera, especially at Cannes, which is the most attractive of all the resorts. It is not such a terrible journey after all from Paris. The trains now are very fast and fitted with a comfort and even luxury previously unknown, so that the female traveler can make her way to the capital of sunshine and fashion almost without noticing the journey. Barely a touch of rouge and powder required upon arrival.

In the morning at Cannes, chine or knitted woolen materials, sometimes mixed with silk, are worn. The jersey or vest are edged, like the tailor-made, with braid. Very pretty also are the simple crepe de Chine dresses with initials embroidered on the breast or on the pocket. 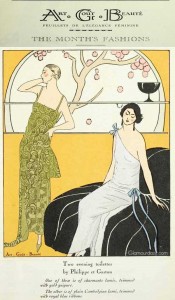 No tyranny in Millinery styles.

What distinguishes this summer’s Cannes styles and gives them charm is the eclecticism that prevails in toilette’s, mantles and hats. All styles, sizes, colours and materials are allowed. Women are thus free to dress according to her taste. That being said – the dominating factor being seen on and around the coast is still the narrow line – drapery that does not give extra fullness or length.
In regards to hats, one sees a good many of the Directoire shape, or toques made considerably higher at the back than in the front. Faille and taffeta are in competition. Both are very pretty – which adds to the difficulty for a girl to choose!
Profusions of feathers and flowers are seen at evening functions – the ostrich feather is now dominant at the dance – flappers anyone?