7.Women’s Role during the War

Women serving in the War

There were two main roles that women could be in the military service. They were the Women’s Army Corps (WAC) and the Women Accepted for Voluntary Emergency Service (WAVES).In 1942, Mrs. James Forrestal who was the civilian uniform adviser to the Navy and the editor for American Vogue had “asked American-born Paris designer Mainbocher to design uniforms for the WAVES [and] not surprisingly, the WAVES were considered the best-dressed American women at war.” (Walford). 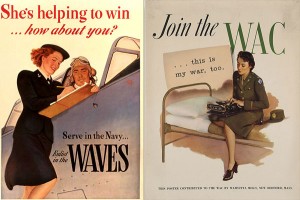 The importance of the stylish uniform was that it “attracted recruits, who also recognized how easily the suit might be altered to post-service use by simply removing the insignia.” (Walford). This shows that the style of the uniform was already similar to that of everyday women’s fashion during this time, but also that perhaps the military look had developed from these uniforms.

Soon after the United States became involved in the war, “employment ranks swelled by great numbers of women in blue overalls and hair bandannas working in place of the young men.” (Jennings). During this time, the “women began to gain more respect and men realized that women actually could work outside of the home.” (“World War Glamour…”, Glamour Daze). This was a huge change to the workforce as women “began to take over ‘male’ jobs and gained confidence in themselves.” (“World War Glamour…”, Glamour Daze). It was asked of women to “play active roles in the industrial workforce, while maintaining morale by keeping up a feminine appearance.” (Walford). This was quite difficult as “Women in factories often wore shapeless jumpsuits and kept their hair pinned up under a scarf tied about their head into a turban.” (Walford) as well as work boots or sometimes trousers rather than the jumpsuits. 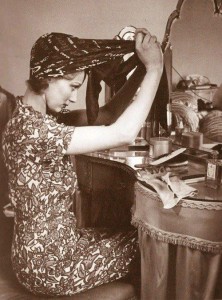 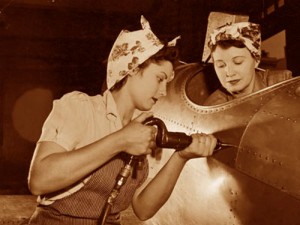 These types of clothes were seen very unfeminine at the time because they had once been worn by only men and the thought of this lowered the morale of the women. As a motivator, “’Rosie the Riveter’ was the icon of Working Ordnance Women (WOW), and her turban-wearing image became a symbol of patriotism used to encourage women to take on wartime jobs.” (Walford). This icon was also known by her ‘We Can Do It!’ slogan which further uplifted the spirits of women. It was definitely a form of propaganda to boost the morale of American women. In relation to the fashion industry, “cosmetics were [actually] recommended, especially face creams, to protect their skin from toxic chemicals.” (Walford). Industries changed to become factories focused on making equipment for the war. For instance, “a corset company became a grenade belt manufacturer.” (Jennings). Because of the war, it made changes to the industries in the United States from the gender of the people who worked in them and what they wore to what types of things were manufactured.

Next Chapter – 8.Post-WWII Influence on fashion