Even though the war finally ended in 1945, everything did not immediately return back to normal in the United States so “Patience was important in the post-war world, [as it] still looked very much like the wartime world.” (Walford). As a result, “Wartime debt and post-war inflation were of great concern. The largest problem was convincing civilians to accept rationing for several more years.” (Walford). In the meantime “While the full effects of the freeing of materials would not be seen until spring 1948, American fashions could now be designed as full and frilly as women wanted.” (Walford). Thus in 1947 when the “clothing restrictions ended” (Lindop), many fashionable traits made a comeback. Once again, the nylon stockings became very trendy and sales “skyrocketed” (Lindop). “There wasn’t a fashionable woman alive who couldn’t wait to jump into the latest pair.” (“1940’s Fashion – Womens Dress Style after the War.”, Glamour Daze). 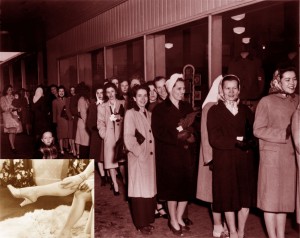 Also, color came back into fashion so drab colors were replaced with “shocking feminine primary colors” (“1940’s Fashion – Women’s Dress Style after the War.”, Glamour Daze). More fabrics were utilized that used to be scarce such as “linen, cotton, wool, silk.”(“1940’s Fashion – Women’s Dress Style after the War.”, Glamour Daze). and rayon were popular choices. As for shoes, women still wore wedge heels “but now with shallower wedges.” (“1940’s Fashion – Womens Dress Style after the War.”, Glamour Daze). New styles appeared that consisted of “more delicate, high-heeled court shoes, or shoes finely strapped round the ankles” With many more other fashionable items soon to be on their way, there was a positive increase in the recovery and advancement of the fashion industry in the United States.
In the long run, “the war actually stimulated the economy” (Nelson) after all those years of saving up and rationing. People had begun to realize that they had no restrictions as to what they could do and it was a time of celebration once the war ended. Once again, the silhouette changed from the masculine outline during the military time back to having a more feminine look. In addition, some of the styles of women’s fashion also became more lavish and feminine. The “rounded shoulders, long spreading skirts, V-necks, narrow waistlines, flouncy hats, high heels, and bright colors.” (Lindop) all became the main characteristics of the womanly figure of the silhouette.Some of the skirt hemlines “hung just below the calves.” (The University of Vermont) which is an alteration to the hemline that appeared during the war.This essentially became known as the designer Christian Dior’s New Look which began in February 1947. It was said that “the clothes had ‘such a new look’” (Walford) and this phrase was repeated so much that everyone knew his style by this name. 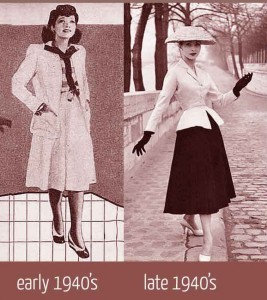 What was so different about Dior’s look was “in its abundance – the excessive use of luxurious fabrics and time-intensive labor. The overly female form that he presented was created through the use of padded hips and bust lines.” (Walford). One of his collections called ‘Corolla’ was “based on the figure eight [and became] the epitome of what the fashion media would dub the ‘New Look’. In reality, Dior’s silhouette was far from new. The style was heavily influenced by fashions of the mid-1910s and before.” (Walford). Although the look did get a lot of positive reactions from the public, there were also negative ones such as “There were objections to the cost, and to the extravagant use of materials, which would render existing knee-length wardrobes unfashionable within months.” (Walford). Also, “initial buyers found the style cumbersome for daily use. In the United States, many women craved post-war luxury but still required clothing suitable for life at home and work.” (Walford).The New Look was definitely the major change in the late 1940s that occurred in women’s fashion as it changed from a simple, unfeminine, utilitarian look to a “soft, feminine and decidedly romantic image.” (“1940’s Fashion – Women’s Dress Style after the War.”, Glamour Daze). Another big change was in the underwear as “corsets had been finally replaced by the all-in-one girdle and the increasingly popular two-piece – bra and the girdle.” (1940’s Fashion – Womens Dress Style after the War – Glamour Daze). A few more changes that occurred were that “Women started to get permanent waves done by heat and they wore more makeup” (Nelson) now. All of these changes showed that the economy in the United States was picking up quickly after the war and people felt liberated from the war.
An aspect that remained the same was “the trend in home sewing. The length of New Look-inspired clothing required women to find clever ways to alter existing garments to meet the new hemline, which by 1948 was hovering just above the ankle.” (Walford). Now the “American clothing industry was larger and more independent than it had been before the war” (Walford). The state of California had “found its success through recapturing the sportswear industry and promoting it as casual wear.” (Walford), but “Although California led the way for the post-war recovery of the American garment industry, labor costs became prohibitive for some times of clothing manufacture.” (Walford). During this time, it was an important transitional period in the fashion world between the end of the war and the beginning of a new decade.