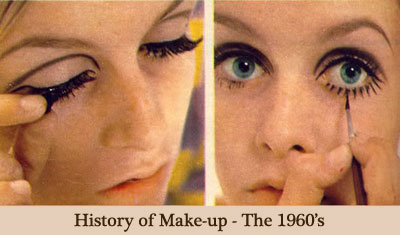 A Brief History of 1960s Makeup

The early 1960s makeup look was all about elegant eyes, pale pink hues and loads of powder. By the mid 1960’s, this evolved in to a simpler girlish style, typified by the likes of British models like Twiggy and Jean Shrimpton.

However the London fashion explosion brought with it – the London Look and a revolution in hair styling (Vidal Sassoon) and Makeup (Mary Quant Cosmetics), and all eyes for a time turned to the fashionable scenes of Carnaby Street and Portabello Road in London.

Eye contouring 60’s makeup for deep-set eyes, prominent eyes, small eyes and close-set eyes. Whether it’s the makeup of Pattie Boyd , Jean Shrimpton or Twiggy’s makeup look that you wish to emulate, these tips are the ones to follow for your eye type, regardless of color.

Highlight the whole lid with white. Then blend a pale or iridescent shadow on outer part of lid to wing up and out.
Highlight just below the arch of a good brow-bone. But if the brow area is fleshy or overhung, shadow the prominent bulge away with brown, beige or grey. Line top and bottom lids finely, and mascara lines.

Apply a pale or softly iridescent shadow over the whole lid. Outline socket crease with dark shadow or pencil, feathering slightly upwards at outer end. Highlight just below the arch of the eyebrow. Finely outline upper and lower lids, extending lines slightly beyond the eye corner and leaving them open. Thicken the line on the top lid in the center. Draw the line under the eye a fraction below the lash roots and soften with a fingertip. Use lots of mascara on top lashes and tip bottom lashes with color.

Highlight the whole lid with white. Then blend a pale iridescent shadow on outer part of lid and wing up towards brow-bone. Finely outline three-quarters of top and bottom lids, curving lines slightly beyond the outer corner and leaving them open. Broaden top line near outer corner. Draw bottom line fractionally below lash roots and soften with fingertip. Lengthen outer top lashes with a lash-building mascara or half-strip of false lashes. Tip outer bottom lashes with mascara, and draw tiny lashes for the evening.

For original 1960’s makeup tutorial books, direct to your device, we suggest visiting Vintage Makeup Guides. You can perfect the sophisticated Mad Men makeup style of Jessica Pare with ease.

You can also watch our viral success – Vintage 1960’s Makeup Tutorial on our YouTube channel. With nearly 6 Million hits, it’s popularity is showing no signs of waning.

This short is an AI enhanced compilation of a makeup and hair feature from the film Girls Girls Girls. Courtesy Harold Baim Collection (Richard Jeffs).

The London 1960s makeup look, if it could be defined, was pale lips and pale eye shadows. Besame Cosmetics produce the perfect retro 1960’s lipstick with their portrait peach lipstick.

A gallery of makeup inspiration for you to enjoy. Women of the 60’s applying their makeup.

Yardley of London – tapped into the new youth look and their firm experienced a whole new lease of life with iconic 1960’s models Twiggy and Jean Shrimpton modelling their makeup products under the banner of The London Look.

English Model and Beatles chick Pattie Boyd wrote a Letter from London column in the American teen magazine 16. Teens from across the USA eagerly read about her exploits and followed her makeup tips and Hair Tutorials. There were three distinct looks in the 1960’s, the classic, the mod and the hippy. The mod look is the cosmetic look most remembered from this beauty era.

By the mid 60’s, emphasis went back to the eyes in makeup. In particular false lashes, or  more liberally applied mascara helping define the 1960s makeup style.

The 1960’s was the first ‘retro’ decade with styles in clothes, makeup and hair hearkening back to the 1920’s. However with a more waif like appearance. Lips were pale to help emphasize eyes. Legs were finally revealed in all their glory via the miniskirt fad.

Eye-shadows turned pale for a daytime look. In the evenings – lush primary shades like blue and green were in vogue. Foundation compacts out-sold liquid and cream foundations. The Mod look dispensed with the heavily powdered elegance of the early 1960’s.

In the Swinging Sixties in contrast with paler eye-shadows, foundations and rouges all emphasis went on eyeliners and lashes. False eyelashes applied with lashings of mascara were made particularly popular by Twiggy. Lip liners were rarely used by younger women, who now preferred a softer line.
For a time lipsticks took second place to the eye.
Notable 1960s cosmetic brands include Mary Kay Inc (1963),Cover Girl (1963)