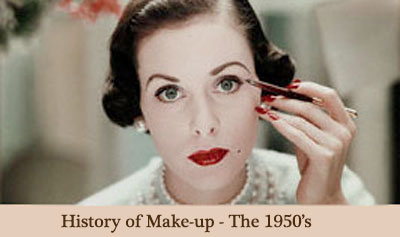 A concise illustrated guide to 1950s makeup looks and cosmetic developments, featuring the key styles for women in that decade.

The age of makeup entered its golden age in the 1950’s. For the first time, unknown models began to rival the big Hollywood names in becoming the ‘face’ of makeup brands. 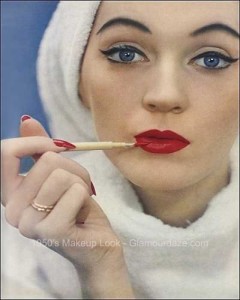 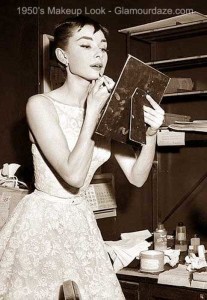 In Britain Gala of London marketed a real sense of Haute Couture to their makeup range. However when conjuring up the 1950s makeup look it’s difficult not to see the faces of those glamorous post-war beauty icons – Elizabeth Taylor, Natalie Wood, Marilyn Monroe, Grace Kelly, Audrey Hepburn, Doris Day, Ava Gardner, the list goes on and on.

The 1950’s was a glamorous decade. Creams foundations and shadows were the in thing..It was the era of the ‘mask effect’. A thick creamy application of foundation and flesh colored powders to set. Eyebrows still a natural look but more tapered and feminine. Rouges were less emphasized than in the 1940’s. If there was a color to define the 1950’s – it has to be pink. Pink hues in shadows and reddish pink lipsticks.

Mascara from brand leaders such as Maybelline was an imperative cosmetic to have in your handbag. Though it wasn’t until the 1960’s that women applied it again to lower lashes again [ as in the 1920’s ]. Loads of newly patented cosmetic tools like eyelash curlers and eyebrow stencils helped young women achieve the look of whatever starlet took their fancy.

The Cat eye-line or the winged tip which defines the current retro pinup look – such a simple innovation, added real glamour to a girls eyes and was often preferred by women to a heavy eye shadow look.

Marilyn Monroe’s favorite shade is this 1950’s red hot red lipstick. It’s fire engine red color will bring out the bombshell in any woman. Like all their lipsticks, this is a true replica of a 1950’s lipstick.

Skin improvement cosmetics began to sell as fast as the old traditional ‘face paint’. The consumer race was on to create the perfect youth preserving cosmetics. In 1949-50 Hazel Bishop unveiled to much excitement the first non smear lipstick. Revlon  followed this with their own by own non-smear lipstick’ in 1953. The ruling shades were pastels in the 1950’s and pink lipstick replaced the reds for a time as the lip color of choice – especially among younger women. Audrey Hepburn once declared that she ” believed in pink!” and who could argue with Audrey? 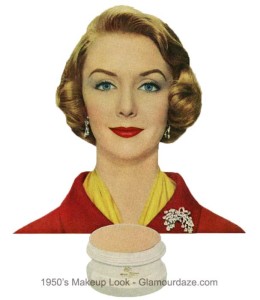 A much heavier makeup look for the face was in order with liquid foundations and loose powder appearing on dressing tables again. The eye shadow look of this decade was much more minimal than in previous decades, eye-shadows now containing shimmer and a huge palette of colors.
Revlon produced ‘eye-shadow palettes’ with two or three shades to create a specific look. A soft but definite eye line and eyebrows a slightly darker shade than the natural.

In 1954 Avon [ founded in 1886)  launched their “Ding Dong Avon calling” campaign and became one of the longest running and most successful advertising campaigns in history.By 1957 there were over 100,000 Avon representatives.
Notable brands to appear in the 1950s included Biotherm (1952), Clarins (1954), Shiseido International ( 1957).