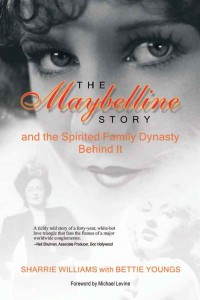 History of Mascara – Maybel Williams and The Maybelline Story

How many women in the world are aware that they owe a debt of gratitude to a young lady called Maybel Williams – who – following an accident in 1915 – singed her eyelashes?
The resourceful girl had a flash of inspiration and burned a cork, mixed the ashes with some Vaseline and then applied it to what was left of her lashes. In an instant she resembled a Hollywood starlet! ‘Eureka!’ – mascara was born ! Not exactly of course. The art of dying lashes goes back to Cleopatra, but there was no removable cosmetic of this kind that a woman could buy in a chemist.
Her brother Tom along with his brother Noel took this idea and developed Lash Brow Line – the worlds first commercially available mascara.In 1916 he changed the name to Maybelline – named after – you guessed it – Maybel Williams! The name being a combination of Maybel and Vaseline !

Eugene Rimmel is also credited for producing the first petroleum jelly mix but the product that we all know and love today is without question down to the success of Maybelline. The story of Maybelline is not only one of glamor and success but of mystery and intrigue which until recently has remained untold. The big money did not actually come in to the family until the company was sold in 1967.

In 1978  came the mysterious murder of the original  ‘Miss Maybelline’ – who died when her home was bombed. Maybelline heiress Sharrie Williams – Miss Maybelline’s grand-daughter  and Tom and Maybels great niece – now tells the true story – and I can certainly say it has all the ingredients of a real dynasty drama in her book “The Maybelline Story” Sharrie has very kindly agreed to talk to Glamourdaze.

Sharrie , can you give us a quick synopsis of the Maybelline Story?

SW: The Maybelline Story traces the history of cosmetics in America and how one simple eye product caught the imagination of the public. Yet, unlike any other book about beauty, it reveals the never-before-told story of this man who invented mascara, Tom Lyle Williams (my great uncle)–a private figure who hid from the public because he was gay. To stay safe from the scrutiny of the press and government (which in the early thirties deemed mascara the “province of whores and homosexuals), Tom Lyle cloistered himself behind the gates of his Rudolph Valentino Villa and, with the help of his lifetime lover Emery, ran his empire from a distance. The deeper Tom Lyle went into hiding, the more his sister-in-law and ultra-ego Evelyn (my grandmother,) struggled her way to the spotlight. Attracted to bad boys, she married one–Tom Lyle’s playboy brother Preston (my grandfather). From that moment on, Evelyn used the Maybelline name–and later, its money–to reinvent herself from circus ballerina to flamboyant flapper, extravagant socialite to dinner theater star. Now, after nearly a century of silence, this true story celebrates the lives of a forgotten American hero–one man forced to remain behind a mask, and one woman whose hunger for beauty ultimately destroyed her. Spanning three generations, The Maybelline Story shows the hidden haunts of sudden fortune, and the tragedy that ensues when vanity lets loose. Finally, it speaks to women s’ decade-long desires–to be beautiful and be loved–and asks the question: At what price, beauty?

What is interesting is that the whole family became involved in Tom’s enterprise starting with your great uncle Noel along with your grandad Preston and grand aunt Eva! Did Mabel have anything to do with the business?

SW:Tom Lyle renamed his first eye beauty product Lash-Brow-Ine, to Maybelline in honor of his sister Mabel who gave him the idea for mascara, in 1915.  She had burned her lashes and brows tried to make them grow back and look darker by mixing a concoction of Vaseline and ash from a burned cork in her hand and applying it to her brows and lashes.  Tom Lyle took the idea to a chemist and Maybell Laboratories was born.

SW: My grandmother got that title when she opened a Dinner Theater in Hot Springs Arkansas in 1978.  She promoted herself as Miss Maybelline  “Last of the Red Hot Mama’s!” Her story ends in tragedy.

What are your memories of visiting your grand uncle Tom as a young teenager ? I suppose there was lots of free make-up on the go !

SW: My favorite memory is driving all my best girlfriends up to his  estate in Bel Air California, in my blue and white 1957 Chevy so we could get some samples of Maybelline for a raffle our Club was having. He not only gave us the raffle samples, he gave us a giant box of Maybelline products to split up between us. It was the most exciting thing that could happen to a bunch of 17 year old High School girls – a years supply of our favorite cosmetics for free!

As Maybelline took off with glamorous stars like Clara Bow lending their name to the brand – it must have been very exciting. Did your grandfather Preston and your great uncle Tom Lyle enjoy the trappings of Hollywood and all that went with it? It appears that while Preston partied – Tom kept his nose to the grind- stone and concentrated on developing Maybelline.

SW: Yes! Tom Lyle worked to build the brand using the biggest Stars in Hollywood to represent Maybelline and his brother, my grandfather Preston ran to Hollywood to hob nob with them.  Especially with Clara Bow.  However, it was also Preston who called his brother and said, “get out here, it’s Paradise.”  Tom Lyle and his partner Emery flew to Hollywood and soon rented Clara Bow’s Beach House in the Malibu Colony.  All very exciting in those days.

Is it true that Tom bought and moved in to Rudolph Valentino’s old home?

SW: Yes!  After Rudolph Valentino died in 1926, Tom Lyle and Emery rented Clara Bow’s beach house a couple of years, and then rented Valentino’s home in the Hollywood Hills for another couple of years.  They loved the home so much that Tom Lyle bought it, had it remodeled and named it The Villa Valentino.

Tom must have been a true romantic because he remained with his life partner Emery for 50 years until he died !

SW: He and Emery met in Chicago when the Maybelline Company was just getting off the ground.  Emery was in theater and very flamboyant, talented and brilliant.  He helped Tom Lyle write the Maybelline ad’s that appeared in movie magazines.  When they moved to Hollywood, Emery continued to write copy for  Maybelline’s spectacular advertisements and remained by Tom Lyle’s side until his untimely death in 1964.  They were devoted in life and are even entombed together in death.

In December of 1967 the company was sold and your father”s family came into considerable fortune. Did this affect your life?
Your grand mother Evelyn married again late in life and had her will changed. Did this cause much upset?

SW: My father, was raised by his mother Evelyn and his uncle Tom Lyle, after his father Preston died.  When the Maybelline Company sold, my father inherited a fortune overnight and all of our lives changed.  It was a blessing and a curse, having so much so soon and it went to my grandmother’s head.  She was always beautiful even in her 70’s and when she got involved with a younger man and quickly married him, she took us all out of her will.  It was a nightmare to say the least, but it forced me to finally grow up and develop myself into a real person.  When I was young and so spoiled by my grandmother I never cared to do anything but shop and look beautiful.  After her death I wanted to go back to school and write my book.  It took many years, but in the end The Maybelline Story was told.

The original Miss Maybelline – was your grandmother Evelyn whose famous quote was “Many a wreck is hid under a good paint job” .
Her story ends very tragically in an unsolved murder . Tell us what happened?

SW: She followed her new husband to Hot Springs Arkansas in 1974 and found out he and his ex-wife had plans to kill her and take all her money.  She survived, but got mixed up with a business partner who exploited her in the Bible Belt.  She opened her Hollywood Palace Dinner Theater and receive death threats.  You have to read the book to find out what really happened to Miss Maybelline.

Now Sharrie – be honest – do you wear Maybelline cosmetics yourself ?

SW: After The Maybelline Company sold and we were so well off . I must admit I stopped buying Maybelline and instead bought Cosmetics from Neiman Marcus. One day in my 40’s I decided to try Great Lash again and was amazed at how good it was.  I stopped using Estee Lauder mascara and started using Great Lash.  It is still the one Mascara in my make-up bag today.

Are you still proud of today’s brand of Maybelline ?

SW: Oh definitely.  Maybelline is still the number one Cosmetic brand in the world – and a Great Lash Mascara is sold every 1.7 seconds somewhere around the world.  Maybelline New York is owned by L’Oreal today and has a tremendous advertising budget…..I must admit their commercials and print ads are spectacular.  They also have a much larger line of products than the original Maybelline Company, which makes them appealing Globally.  I’m proud that the little Maybelline Company that started off with a $500 loan almost 100 years ago, is a multi-billion dollar Corporation today.  And to think that it all began with my great uncle, Tom Lyle Williams a 19 year old entrepreneur with a good idea.

If you want to read the story for yourself – treat yourself to The Maybelline Story.
Like her Nana Evelyn – Sharrie Williams herself was and remains a beautiful and glamorous woman, of whom Tom Lyle must have been justly proud, so we finish this post with a slight amendment to the following well known quote ” Maybe it’s Maybelline or maybe she was born with it !”

2 thoughts on “Mascara – Maybel Williams and The Maybelline Story”