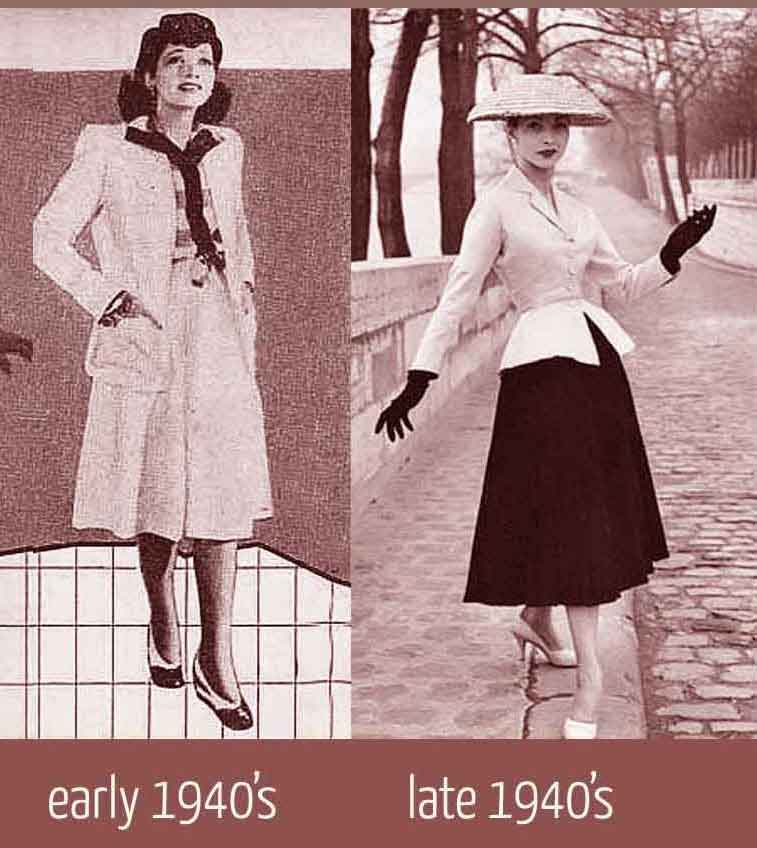 If you are looking to quickly and easily recreate the 1940’s look for a party or some function, try our Easy Guide to 1940s Women’s Dress and Style

The image of the Land Girl / Factory Girl and the restrictions of Utility clothing, was replaced very quickly by a return to a more feminine fashion. The American Look had dominated fashion during the war, with Paris somewhat smothered during Nazi occupation.

Though Christian Diors outrageous New Look certainly dominated the headlines in 1947, it is perhaps true to suggest that fashion was becoming more feminine on both sides of the Atlantic, and not merely due to a decree from Paris.

The Silhouette | The Detail | The Color | and the Fabric

In the 1947, women’s dress code changed dramatically from the trim waist and hips ,broad chest and shoulder pads with shoulder-length curled or rolled hair to the New Look !

Christian Diors almost frenetic employment of frau-frau in this styles, with severely cinched waists and extra padding to the hips, suggested a return to the Gibson girl look of the 1900s.

It was of course stylized and the gamine  silhouette was just as easy to emphasize. The key here was the movement of the line from the shoulders back to the hips and waist again.

The New Look debuted via Christian Dior in 1947. The sloping shoulders, cinched waists ,and wider than wide hips certainly made for great media coverage after the gloom and horror of the war. 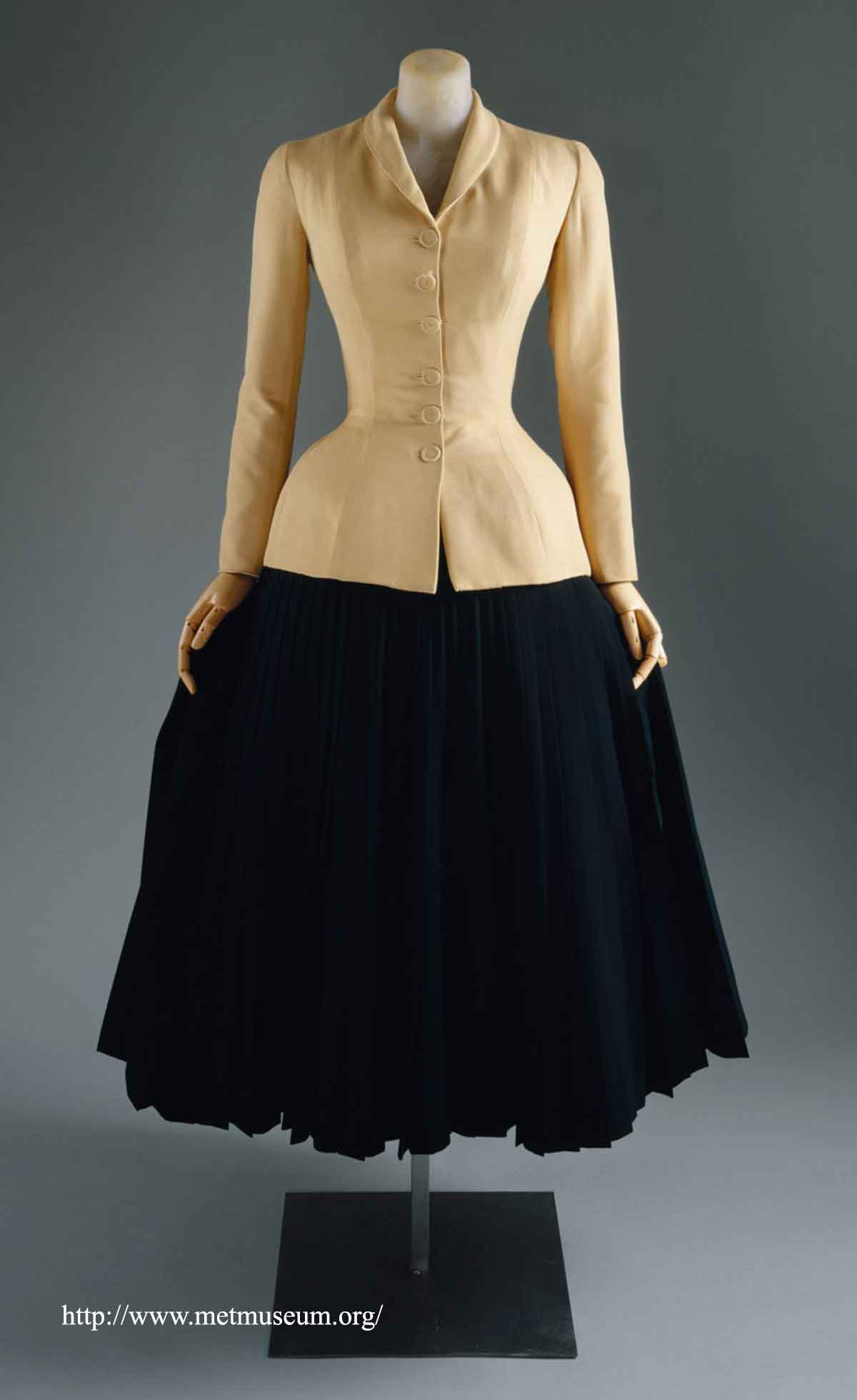 With Longer lengths and drastically fuller skirts. Woman’s fashion now changed to a soft, feminine and decidedly romantic image.As a result, ironically, women’s emancipation was stalled somewhat with women being shooed back into the kitchen once more. 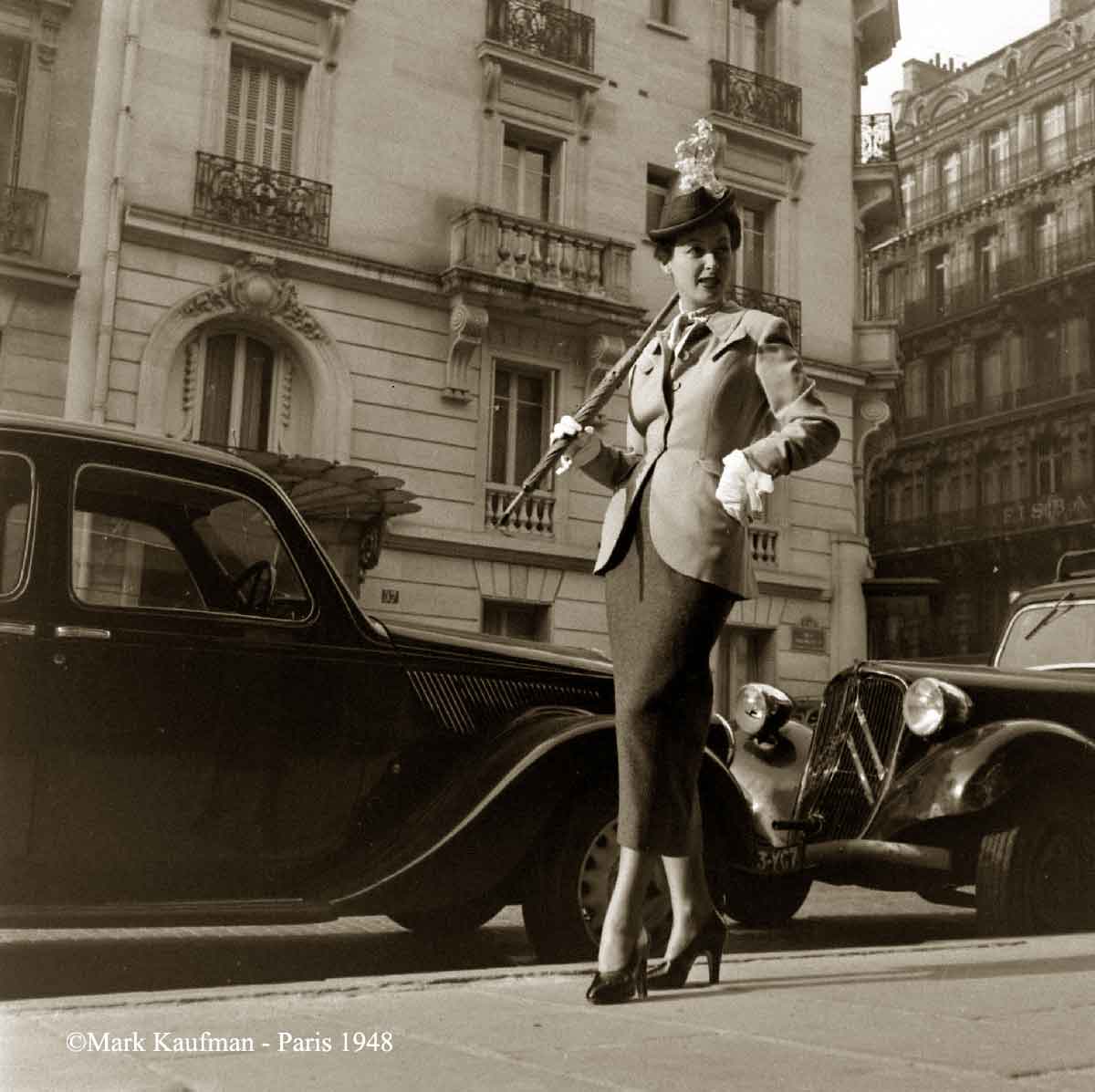 1.The fitted jacket-and-skirt suit, with a peplum to the hip
2. One- and two-fabric day dresses with squarish curved necklines,
3. The bust shaped by soft flowing gathers , swags or drapery on the skirt.

1. Lace and taffeta with asymmetric, bouffant styling were all the rage.
2. Cap sleeved cotton blouses [ and rayon too for a while until polyester arrived ]
3. Wide-leg pants and matching tap-style shorts for recreation .

By the end of the forties,corsets had been finally replaced by the all in one girdle and the increasingly popular two piece – bra and the girdle.

Nylon Stockings began to adorn women’s legs once more, having been used chiefly for parachutes during the war years.

This time the sale of fully fashioned stockings took off on a global scale.
There wasn’t a fashionable woman alive who couldn’t wait to jump into the latest pair.

Wedge heels were still worn but now with shallower wedges.
Shoes became more delicate,high-heeled court shoes, or shoes finely strapped round the ankles, worn with beige nylons were the rage for a time as part of the ” New Look”.
Plain high heeled black leather or suede court shoes were the main shoe style.

Hat design for women went completely mad during the 1940’s – every shape and size was in. Recycling your old hat into something unique was also very popular.

A becoming hat was designed to enhance your good features and to counteract ones less attractive features.

For example -glasses were not considered a nice feature for a girl in the 1940’s.

Oh dear – we can’t have that, can we ? ! -so a hat with a brim worn just above glasses would make them less conspicuous.etc.

Headscarves -having been used extensively in the factories during the war were also incorporated by designers.

Rouched Chiffon Gloves were popular in the 1940’s and Opera Gloves continued to be worn right into the 1950’s for evening wear.

The color of fashion in the early 1940’s went to war as well,with patriotic nautical themes and dark greens and khakis dominating the color palates,though some morning dresses had bright floral shades. After the war, color became a feature once more,with shocking feminine primary colors becoming the rage, as exemplified by the glossy Vogue Covers.
Clothing Dye like DYLON went on to thrive in ‘make-do & mend’ post war Britain making fabric dyes to brighten up the homes, wardrobes and spirits of women across the country.

The Color Helm, produced by Ostwald Color Standards in the 1940’s was the standard
color guide.

The Women’s Wearing Apparel version was hugely popular for obvious reasons.
It suggested color combinations [ for home dressmaking or dyeing ] in the degree of contrast
wanted !

Natural fibers such as linen, cotton, wool, and silk. Rayon [ artificial silk ] originally patented in 1926 for dress making was the big thing for those women who were handy with a singer sewing machine.