Often regarded as some sort of stop gap between the 1920s and the 1940s, the 1930s fashion era is often overlooked as a significant decade for style. Despite the Depression, it is remembered as the era of escapism, glamorous Hollywood starlets adorning billboards and as the halcyon days of radio entertainment. No less so in the beauty and clothing styles of women.

With the abandonment of costly decorative techniques in favor of simple art deco lines and patterns, the consumer age took off in strides with increasing provision and marketing of ready to wear fashions which women even on low incomes could strive to afford. Paris still dominated fashion, but the increasing influence of London and New York and of course Hollywood, forced Paris to come down off its lofty perch and democratise its designs.

In response to the reality of a global depression, Paris couturiers dropped their prices rapidly in 1931, and also accepting that their designs would almost continue to be ripped off, they continued their practice – started in the late 1920s of selling models to retailers in the the USA for duplication – who in turn would license patterns to fashion magazines for publication in ” the style of” .Women from the late 1920s onwards hence eagerly scanned magazines for the latest ‘Paris fashion’ patterns from Doucet, Chanel, Vionnet et al.

Glamourdaze recently reviewed the wonderful new 1930s fashion Source book by Charlotte Fiell and Emmanuelle Dirix. A 600 page visual
encyclopedia of of fashion in the 1930s and a real treat to browse for image sources. It’s available now from Carlton Books

One point that caught my eye from the introductory essay was the declaration that ‘ fashion is not about reality – but rather elitism’
Well there is no better decade than the 1930s to see this in effect. While Capitalism fell firmly on the sword of its own making and millions
of people were plunged into not only economic depression but genuine hunger – at the very same time the world of fashion took off like never before into a realm of fantasy and glamour that still shines out at us from more than 80 years ago like a distant supernova.
Fiell and Dirix point out that ” the 1930s working woman was an ‘all grown up’ version of the 1920s flapper.”

Well the movement from the gamine looks of the twenties to the womanly curves and feminine bias dresses of the Thirties certainly backs that up.
However they make the point that while the 1920s flapper was very much a stereotype, so too was the Hollywood siren.” In fact there were
many other facets to the fashionable woman’s wardrobe!”
While there is no denying that fashion went through a phenomenal progression during the 1920s, the economic boom fuelled this in many ways.
but the 1930s was no less experimental, just less dramatic in its progression. Fiell & Dirix write that ” change in the 1930s was continual – a depression is never a good time for experimentation”

The 1930s Fashion Sourcebook begins with a concise essay which is well worth reading  in order for you to appreciate the following 600 pages of images in their fullest context with regards to silhouette,- the return of the nipped waist, the increase in use of shape-wear, the dropping of skirt hems, and the gradual move away from the 1920s look to the broad shouldered, puffed sleeves that would reach its zenith in the war years of the early 1940s, the changing position of Paris with London and New York as a source of fashion innovations.

The influence of Hollywood is explored – something Glamourdaze has written about before. Another point Fiell and Dirix make is that the Depression brought about a market democratisation in women’s clothing. The birth of cheap ready to wear copies of the high fashion elite during the early years of the 1930s is a trend continued to this day.” Many women who had previously been able to afford tailored couture garments were forced to abandon that luxury”. Sears catalogues sold by the hundreds of thousands with garments ” clearly marketed toward former couture clientele” with assurances that ” even the inexperienced could complete the simple seams!”

The early looks of the 1930s in many ways continued the styles of the 1920s, albeit with more conservative lines and lower hemlines. The iconic cloche hat which once covered a girls face from view, still carried on for a few years into the new decade but became smaller and were off the face again. ” the softer headgear was in line with the fuller more glamorous hairdos of the era. the angular bob of the Twneties was replaced with a more voluminous demi-wave, finger curls or a waved perm”. 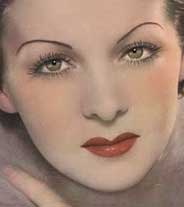 Hair and Beauty became tantamount to women in the 1930s, with the increasing consumer fad for makeup that achieved the looks of the Hollywood starlets on the silver screen. Max Factor, who started his career selling cosmetics to the studios, became the biggest name in makeup for ordinary women across the western world, surpassing the previous dominance of the Coty brand.
” the favored complexion of the 1930s was a natural pinkish ivory or a lighter white wax-like appearance; foundations in shades such as ‘Gardenia’ and ‘Tea rose’ were complimented with ivory and light mauve colored powders to achieve a striking flawless skin. Blushers in light pinks were used but many women preferred not to wear any to retain the waxen look.” [ 1930s fashion sourcebook] .

In fact if there is one distinct difference between the 1920s and 1930s face – it is the lack of rouge! that being said, many women could not afford foundation creams and continued to rouge away. Another clear difference was the plucking away of eyebrows – in some cases completely – preferring to ” draw the desired shape with an eyebrow pencil”

Jean Harlow made the painted eyebrow look popular for a time.” Colored nail polish became more and more popular – so much so that lips and nails were expected to match by the mid 1930s. Cutex declared that ” matching lips and nail colors are the new sensation!”
Fiell and Dirix explore the sensation to fashion that was Hollywood. Costumers took Paris designs and ” turned them into over the top glamour!
One little known fact about Chanel – which is not mentioned by Fiell and Dirix is her rather disastrous attempt at being a movie costume designer!

In 1931 Sam Goldwyn paid Coco Chanel a staggering one million dollars to design on and off screen costumes for some of MGMs biggest actresses. Hollywood was determined to keep up to date with the changing modes. The Chanel experiment failed however – when her outfits for stars such as Gloria Swanson and Ina Claire failed to ignite any enthusiasm from reviewers, criticized for being too boring!
instead a new phenomenon of costume designers getting headlines began. Names like Adrian, Edith Head and Orry Kelly soon became as well known to fashion magazines readers as any haute couture designer.
An interesting aside in the introduction to the 1930s Fashion Sourcebook is how fashion foundered in Hitlers Germany. Many great German designers had to either flee their country or capitulate to Hitlers fascist views of women ” without makeup and hair worn in buns or platts”
One key feature also mentioned is how sportswear took off in strides in the 1930s.Sun worshiping was on the rise and Jantzens swimwear and beachwear got shorter and more womanly. Beach pajamas were the rage ” de rigueur throughout the decade”

The introductory essay concludes by saying that the increasing warmongering of nations had a distinct impact on women’s silhouettes, with a more military and masculine look appearing in fashion lines.
I’m not sure if I fully agree with this assertion, but there is no denying that there was a distinct shift from 1936 onwards to a more angular broad shouldered style – often attributed to the likes of Elsa Schiaparelli – who had been adding pads to her jacket shoulders since 1930!

The 1930s Fashion Sourcebook is really worth having – I love it and you will too. Hopefully we’ll have an interview with one or both of the books authors very soon, so keep your eyes peeled.