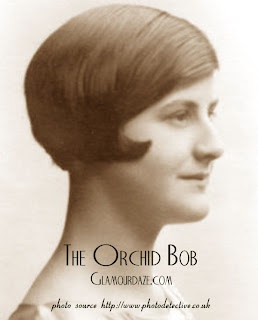 Bobbed hair was first made popular by dancer Irene Castle, as far back as 1916, is the definitive hairstyle look for the 1920’s. Known as the Castle Bob it was simply a tousled straight round cut that was level with the lobes of the ears. As the 1920’s advanced, it became synonymous with the flapper look. To wear your hair short was a major statement by a woman, one of independence.

The hair revolution took off so much that Scott Fitzgerald, the author of The  Great Gatsby, wrote a short story called Bernice bobs her hair which tells the story of a girls transformation from sweet society girl to vamp !
Bernice became a role model for many young flapper women.

In Paris, fashion designer Coco Chanel had her locks cropped. Young Hollywood stars such as Colleen Moore and  Louise Brooks took the page boy look, also known as the ” Dutch Bob ” This is probably the most definitive and iconic bobbed hairstyle remembered today.

The New York Times reported in 1924 that thousands of women of all ages were invading the traditional mens  barbers and demanding the new cuts !

The Eton Crop  – Shortest of all 1920’s hairstyles

1920’s Finger waves or the Shingle bob became very popular and soon hairdressers were falling over themselves
to come up with the next New Hair Look. By the late 1920s the Eton Crop was a dominant cut.
The differences between the Orchid Bob, Eton Crop, Brushed Back Bob, Tousled Frizy Bob, The Shingle and all the other popular haircuts for women in the 1920’s was not exactly easy to tell, other than that they were all generally influenced by taking a pair of scissors to the once cherished long locks of a woman. It was a big decision, as the soft condition engendered by long hair could never really be reversed.
Thanks to Photo Detective for these wonderful images of 1920’s hairstyles.