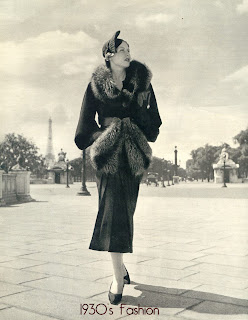 The street fashion and hairstyles of everyday women in the 1930’s from a unique film by Ivan Besse shot in the small South Dakota town of Britton in 1938
The Wall Street Crash had a huge impact on women’s fashion in the 1930’s.
Lots of women took up sewing and the Women’s Institute became famous for it’s sewing manuals and in particular those of the famous Mary Brooks Picken.
Everyone had a Singer sewing machine in their house as thrift was the name of the game. This film shows typical late 1930’s fashion and 1930’s hairstyles of normal everyday women. Hollywood fashion now had a huge influence. All the latest designs were draped over the female stars of the day like Joan Crawford, Bette Davis, and Myrna Loy It’s interesting to see the extensive wearing of furs, capes, coats, stoles, and wraps of all kinds.
Hats had to be worn at a jaunty angle ! The famous Cloche was replaced by the Beret, Pill Box and
the newer brimmed hats, and the turban .Hangbags were of the beaded or mesh variety and personalised clutches were hugely popular with women. 1930’s shoes were pumps, flats and ankle strap.
Dresses were made from easy washable fabric and synthetics were becoming more and more prevalent.