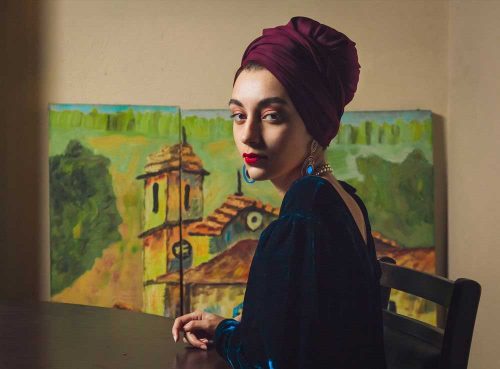 Every now and then, Glamourdaze pulls the switch on the time machine and returns to the present day to enjoy the vintage inspired styles worn by my favorite bloggers. If I can get it together I’ll be featuring some of my favorites in one-to-one interviews. My first is with a young Brazilian woman called Rafaella Britto , a name to watch out for! She’s a fascinating person with an eclectic personal taste in fashion and an encyclopedic knowledge of style. It’s been a delight to get to know her. Like me, she is old school, and runs her own fashion history blog, but you can find her also on  Instagram which is a pretty good place for vintage style fans, and Glamourdaze recently opened its own page there, complete with hashtags.  ( I do not like hashtags !).

Where you live: I was born and live in São Paulo, Brazil.

The first thing you do each day: I take a shower and go meditating.

If you were stranded on the proverbial desert island what music would you want with you?

That’s hard to answer… I couldn’t live without blues – if there’s anything more sensual than blues,  it’s unknown to me. Rory Gallagher is definitely my blues man. His guitar touches the deepest of my soul,  so surely I’d take lots of his albums with me. I’d want with me, also, all Genesis’ albums from Peter Gabriel era – some of the most sublime things  I’ve ever heard in my life. At the same time, I couldn’t live without the romanticism of jazz  and the lament of Latin guitars.

What books have you read recently and again, what books would you be cast away with?

Currently I’m really involved in the literature of Indian poet Rabindranath Tagore. I’ve been also reading books by forgotten female authors, like Elinor Glyn, Margarete Böhme and the Brazilian Dinah Silveira de Queiroz – I’m always in search of forgotten authors.  At this moment, I’d be cast away with Tagore’s “Gitanjali”, a book as sacred to me as the Bible for Christians. And “Dorian Gray” – Oscar Wilde is a huge passion of mine.

Your style blog Imperio Retro (Retro Empire): how it began and the blogs mission?

It began in 2010, back when I was twelve years old and fell in love with Louise Brooks in Pandora’s Box – it’s all due to her and this movie. I became interested in the history of fashion and old cinema at a very young age, and decided to create a blog to share my discoveries into those worlds. The first given name was Love New Look (reference to Dior’s New Look). By that time there weren’t many vintage blogs in Brazil, so it soon gained popularity . But, as a teenager, I didn’t take it so seriously. The name Império Retrô (Retro Empire) came in 2013 when I came across Giles Lipovestky’s book The Empire of Fashion. I found Império Retrô a good name for a fashion history blog: it was about the influence, or power (Empire) of past over present (Retro). Only in 2015 I turned it from a simple hobby into a project of independent journalism dedicated to explore the dialogues between art, fashion and society. My aim is to contribute to the thought of fashion as language, in its cultural, historical, artistic, behavioral, philosophical contexts.

What are your personal favorite posts and the styles you wrote about?

Many… But among my favorite,so far, is an interview I did with Peruvian fashion designer Naty Muñoz; my article on Gibson Girls and how they defined the first American feminine beauty ideal; the one about the origins of thrift stores, and also the articles on great Hollywood costume designers. I write about fashions and styles from all over the world. A plural cultural view is what attracts me the most.

Buzzfeed recently featured you as one of the Top Ten Brazilian style queens to follow on Instagram!

Yes, and I felt honored to be featured alongside other women I admire.

You co-founded Cine Suffragette with two other women, exploring female empowerment and representation in film. What are your thoughts on the influence of Cinema on female culture in the past 100 years, the highs and the lows?

I believe it has had a huge influence. Cinema, like art in general, all around the world, is a reflection of its historical moment. It reflects values, concepts, archetypes, as well as introducing new ones. Taking Hollywood as a major example, we cannot ignore its impact on Western culture, and it’s even stronger when we talk on women,for whom beauty and fashion industries are mainly directed – and we cannot ignore that Cinema, before being an art, is an industry as well. Hollywood has specialized in the creation of feminine myths,dazzling figures that penetrate in our imagination, influencing the way we dress and behave, our beauty standards and ideals – which changed a lot in the past 100 years. I think the problematic question is in how those standards submitted women into a condition of servants of industry’s ideals, and it hasn’t changed. But nowadays, due to the emergence of other medias such as TV and Internet, I don’t see Cinema’s influence as determinant as it was in the past, although it is still a relevant object for analysis.

Your style heroes are ?

I could cite many style heroes of mine: Mick Jagger’s white flare pants in the 1969 historical Rolling Stones’ concert in Hyde Park after Brian Jones’ death, as well as David Bowie’s blue suit in the Serious Moonlight show, were responsible for my fascination towards fashion, back when I was a kid. For me, Brian Jones is a style hero. He was the perfect rock ‘n’ roll dandy, a master in the art of dressing up.

Stones’ girls Marsha Hunt and Anita Pallenberg are queens. I also love Serge Gainsbourg’s bohemian charm. He is the proof that style transcends beauty. I’m passionate about Garbo’s, Dietrich’s and Patti Smith’s divine androgyny, and the daring mystic of Alla Nazimova and Natacha Rambova . When I want to feel closer to my Latin ancestry, I take a look inside Frida Kahlo’s and Yma Sumac’s colorful, artsy wardrobes. They’re muses.

What are the top items in your wardrobe?

There are many items in my wardrobe which I consider as personal treasures, but I’m very fond of my dandy suits and flare pants, as well my collection of Indian dresses and vintage boho vests inherited from my mother. There’s also the blue velvet pre-Raphaelite-style jumpsuit designed by me for my high school graduation, some years ago, and which I wore in my last photo-shoot inspired by Vermeer’s ‘Girl With a Pearl Earring’. That’s a stunning piece!

What photographer do you work with?

Currently I produce my own shoots, alongside independent photographers from São Paulo. This year I’m working with the new and promising Toni Ferreira, Waldir Santos and Rafael Barros.

Your favorite, most influential designers/labels?

I must say I’m a thrift stores addict. As you realized, I’ve got a quite plural style, and thrifts offer a huge diversity of fashions, from alternative to mainstream, from vintage to modern, from haute couture to fast fashion. I buy on thrifts and give my own interpretation for Woodstock looks and Bauhaus decadent glamour, Paul Poiret’s and Mariano Fortuny’s magnificent designs and Rambova’s Avant-garde pieces.

Pagu is my great inspiration – as style icon and as woman. I love Elke Maravilha. She’s my muse,alongside Gal Costa’s psychedelic style during the late 1960’s. The tragic elegance of actresses Carmen Santos and Cacilda Becker fascinates me as well. And Cássia Eller – she’s all what I wanted to be.

Believe it or not, I almost don’t wear makeup – not only because I’ve never learnt how to do it appropriately, but also because I dislike seeing myself much ‘painted’. My daily makeup routine comes down to applying a soft powder, some blush and lipstick, so I don’t have a “just woke up” look. But, actually, I see no need of hiding my facial features, my thick eyebrows or even my dark circles. I’m more into a fresh, natural glamour.

It’s absolutely natural – texture and color. My hair is my genuineness trademark.

You never leave home without ?

Live life in its fullness, as intensely, beautifully, poetically as you can.

What are your plans for the future with the blog etc?

I want to keep on doing all what I’ve been doing, better and better each day. My main plan is to improve my work as a film critic and a history of fashion researcher, so I can provide more reflections and inspirations to my readers, both on Império Retrô and on Cine Suffragette – which is only at its beginning, but it’s an original, pioneering, promising project, thanks to the collaboration of my talented friends Letícia and Jessica.
I’ve got plans for special interviews, articles, photo-shoots … In the future I intend to write books about cinema as well. My head never stops – I’m always planning new things, realizing new projects.