Corsets and padding for Diors New Look of 1947-

With half of London still in ruins, and food and clothing rationing still enforced, this was more of a pipe dream for the average girl, but one can imagine the widening eyes of those still war worn cinema going women in 1947. 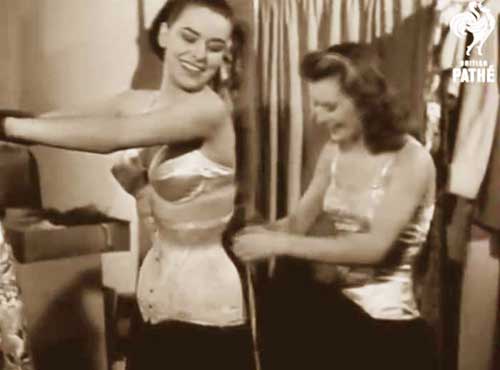 How to get the Paris New Look of 1947 , even if Mother Nature forgot to give you the right figure for it! At a London fashion house, we asked for a demonstration!

First it’s the strait-jacket for that figure of eight appearance.

We call it a Cinch waist ! We know they’re just old fashioned corsets.

Next comes padding for the shoulders and hips, if you’ve still got a breath of air left!

Fitted pads make madam look like a destroyer having its armoured plating laid. But these are the armaments of beauty.

British models have slimmed for years to be a la mode, now the modern girl just hasn’t got what the ‘New Look’ requires!

A last look at the super-structure before we show you a New Look dress by Richards in Utility material.