Inside Christian Diors Salon in 1957

Dior photographed at work in his last months of life – 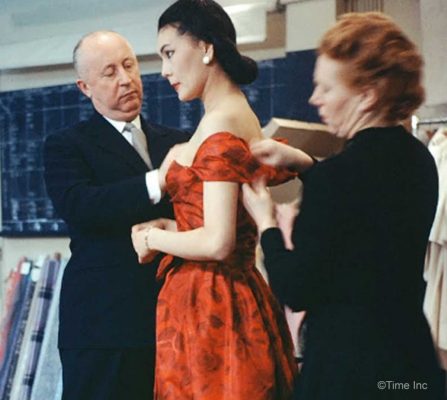 In March 1957 Life Magazine visited the salon of Christian Dior during what was to be the last few months of the great designers life – he died suddenly on October 23rd, with the young Yves Saint Laurent thrust into the role of replacing him. 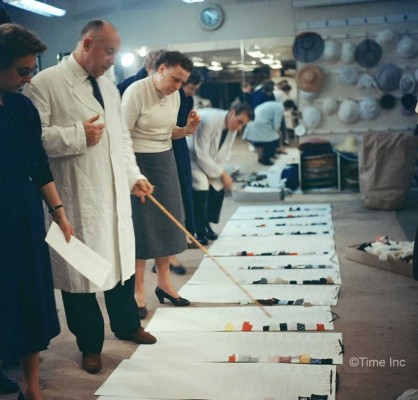 But that March – it was the 10th anniversary of the debut of Dior’s New Look and the benign gentleman was still the most renowned couturier in post war fashion. 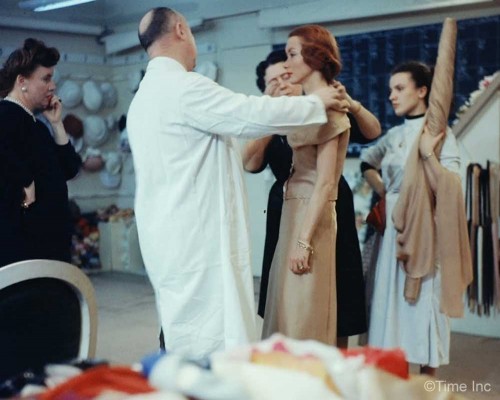 That year of 1947, Dior bowed into the fashion scene at a unique postwar moment when fabrics were skimpy, skirts were short and shoulders were bulky. With his New Look, Dior revolutionized women’s wardrobes.

Now onwards to 1957 ……
Ten years later Dior is still the kingpin of the Paris couture. Inspiring intermittent outeries that he has outmoded women’s bosoms, hips or hemlines.
Dior grinds out some 200 new designs – twice a year and has never had an unsuccessful collection. the son of a fertilizer manufacturer, Dior started out as an art dealer and then turned to designing when he was 30.

In these rare photographs taken by Life Magazine’s Loomis Dean, in the last busy days before his Spring collection opened, Dior is shown as the efficient boss of a big, well-run organization. no mysterious, tempermental genius here, but a cheerful, indefatigable worker, putting in 13 hour days.

He oversees every detail of a model’s appearance from her hat to her walk – and it is he who decides the price of her dress.

Curiously combining the talents of an artist with those of a corporate president, Christian Dior has proved to be one of the most durable famous modern Frenchmen.

The House that Dior built is an impressive financial success. backed by $500,000 from French textile king Marcel Boussae, the firm began with 80 employees. Now it has 1300, three-fourths of which exclusively make dresses !

The couture is largely a hand operation. At Dior, where 30 seamstresses share one sewing machine, the simplest design takes 80 working hours and a lavish evening gown may consume 500.

Today some 60% of Dior’s designs are sold to private customers, the rest to speciality shops or to manufacturers for copying. Although a Dior original costs around $1000, diluted US replicas are turned out for as little as $30.

With representatives in 23 countries, Christian Dior,Inc, has become a $15 million-a-year enterprise.It’s label appears on perfumes, gloves, stockings, bathing suits, ties – a diversification which as won Dior the grudging title of “the General Motors of Haute couture.”