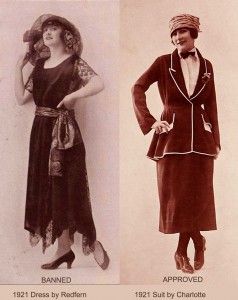 In 1922 – a furor was created when banks across the USA,  including the US Federal Reserve stipulated that ‘women’ should dress accordingly when stepping through their hallowed doors. Above all that insidious creature known as ‘the flapper‘ was banned outright.

The Short, tight skirt, the fluffy scarf rakishly worn, the snappy vanity box, the huge picture hat made up the flapper outfit that Miss Eleanor Physioc wore to furnish a ” horrible example” at a Dress Reform Exhibit in new York City.
When the flapper smashed all the traditions in sight a few years ago and tinkered with the prevailing moralities, a great many people smiled indulgently. True – she had to stand a series of hot shots from conservative pulpits, not to mention a few shrill cries of protest from social workers, old fashioned mothers and modest young men who were afraid of being corrupted. But on the whole, she got away with it. Until now.

Now it looks as if big business will ban the flapper. she will at least be made non existent during business hours if the present movement of de-flapperizing female employees of banking institutions. It all began in a bank in New jersey when an irate mother complained of her son doing business only with a young female employee which she considered illegally attractive. Everything about this woman had a modern and – if truth must be known –  a provocative slant. Her hair was bobbed, her hidden ears hung with jade earrings, her low cut waist allowed certain exciting revelations, and suggested even more. She wore makeup, and as she walked to the rear of the cage, a pair of low-cut, flat heeled sports shoes with champagne-colored stocking clad legs springing out from them came in to view. Even in the way she checked the deposit slips was suggestive of dangerous ideas – said the irate mother. The incident was duly reported to the officials of the bank – The Fidelity Trust company – whereupon the head of the company issued an order ” A rule is herein adopted regarding requirements in dress for female employees holding positions in the bank: The …….Dress ( No……Pattern), sold at ……….Stores, must be worn in either black, blue or brown and all sleeves must not be shortened above the elbow. the Dress hem must not be worn higher than twelve inches from the ground.”

This order created huge indignation amongst female employees, who rose in support of the girl who had started the furor. She contended that she could not be held responsible for the ” wandering brain of some weak-witted mommy’s boy”  Another girl commented – “It won’t work – for one thing it isn’t sanitary, having to change in and out of our clothes at work. I certainly can’t afford to be buying several dowdy old dresses that my grandmother would sneer at – I’m not doing it!”

The US Federal Reserve bans flappers.

Sadly – female employees at the bank had to capitulate or face being fired. The anti-flapper code soon spread to the Federal Reserve, whose female employees were firmly told that there was to be no time for ” beautifying during office hours, no lipstick, no powdering of faces. Bobs were permitted but she could not fluff her hair in banking time. Stockings and shoes must be black at all times and the dress must not be too high at the bottom nor too low at the top!”
So big business has decided – the flapper must go !

Now in 2013 – with the rueful benefit of a global banking recession all around us – it’s nice to know that the ‘evil banker’ did not get his way!