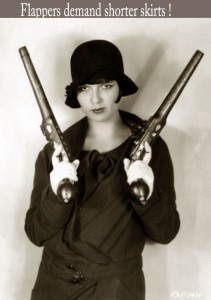 ” Will Paris succeed in imposing long skirts on the Flappers of America?
Not if most of them have their way.
When Paris started the short skirt fad and America eagerly aped it, the dressmakers figured that it would probably run its course. But no ! For American flappers may be fickle, but they know a good thing when they see it. And they intend to hang on to it.” In 1922 the issue of the rising skirt hem was of major importance to women young and old – and usually for very different reasons. The short skirt was still seen in genteel society as representing ‘loose morals’ and only ‘flappers’ wear short skirts. This article is from a more liberated American perspective and there’s even a questionnaire to fill out at the end with pressing issues to be answered like –  Short skirts / Rolled stockings /  Low heeled shoes / Corsets ? For or against !?