The Most Glamorous Department Store in America – 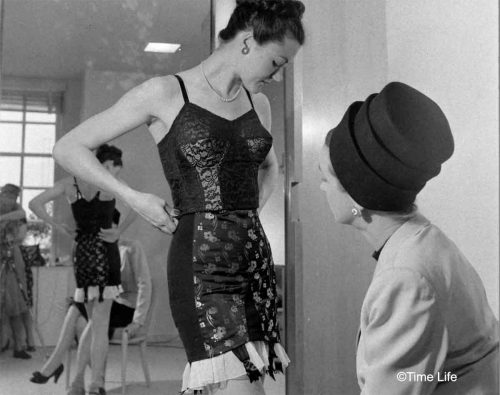 Daphne : Where did Mrs. Crane go, anyway?
Niles : She’s making her annual pilgrimage to the holy land.
Martin : I thought Maris was going to Dallas to visit her sister.
Niles : That is her holy land. It’s the site of the first Neiman Marcus.

In 1945 Life Magazine paid a visit to the Neiman Marcus Department store in Dallas Texas. Photographer Nina Leen preserved the occasion with these glamorous images of American women’s fashion. Set in the heart of Texan oil country – hundreds of miles from the nations fashion capitals, at the corner of Ervay and Main street in Dallas, Neiman Marcus Department store was a phenomenon.

The four story building was a place for women, devised first by Herbert Marcus and then run by his son by Stanley,the hearts of these men were most definitely on the sides of the feminine. By 1945 the store was primarily a place for women’s clothes. It sold more dresses by more couture designers than any other store in the US. The same could be said for its shoes, hats and jewelry (Tiffany and Black among others).
The store was designed like a Hollywood set and boasted theatrical elegance to match the opulence of its clothing departments. Its models and shop assistants were as glamorous as any Hollywood actress.

Founded in 1907 by Stanley’s father Herbert Marcus and his sister Carrie Neiman, it started as it meant to continue – selling only feminine garb. It certainly stood out in a city which had heretofore prospered in cattle, cotton, wheat and then oil. However the fashion store got off to a shaky start when it burned to the ground in 1914! Another famous story told by Stanley was that in 1907 the other option for his father to invest his $25,000 in was the fledgling Coca Cola company. “Neiman Marcus was basically founded on bad judgement!” Stanley often joked. Bad judgement not withstanding, Neiman Marcus went on to become an iconic fashion name. It stood above its peers in other ways too when in a racially divided South in the 1950s, Stanley defied his shareholders wishes by hiring the first black female store assistants in Texas.

His father was a shrewd man and he and his sister spotted a major unexploited local market. a most exclusive  free spending clientele – the ladies of the newly rich oil drillers and cattle barons. In return for their loyalty Neiman Marcus staged the newest styles with weekly, monthly and annual fashion events.

At these fashion shows, models displayed designs sometimes before the likes of even Fifth Avenue. Gowns were not displayed on mere racks but on living breathing models. Designers featured in the visit by Life magazine included Hattie Carnegie, John Fredericks, Lilly Dache, Tina Leser, Nettie Rosenstein, Clare Potter, Adrian to name but a few.

Customers arriving at Neiman Marcus were confronted by a staff of perfumed sales women and models who would firmly but pleasantly guide her through the confusion created by the opulent choice of dresses, lingerie, shoes, cosmetics, bags, coats, jewels, and hats. The store prided itself in being exclusive and was tough with its suppliers. Should they find that a competitor had one of its items, they would withdraw the garment immediately and return to its supplier.

The customer featured here by Nina Leen was a Mrs Guiberson who is viewing several undergarments, beginning with foundation wear.

Back in 1936 Vogue editor Edna Chase declared “I have dreamed all my life of the perfect store for women. Then I saw Neiman Marcus and my dream came true !”