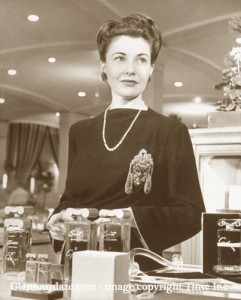 “I dreamed all my life of the perfect store for women. Then I saw Neiman Marcus, and my dream came true.”
These were the words of Vogue editor Edna Woolman Chase in 1936 after her visit to the “One Hundred Years of Fashion” show held in Dallas haute couture store Neiman Marcus.

From 1927 Neiman Marcus became the first retail store to hold weekly fashion shows for women modelling the most luxurious and expensive women’s apparel from lingerie, shoes, millinery, dresses, sable fur coats and wraps to glittering jewelry, gloves and handbags and designer makeup. All direct from New York design houses. Customers had clothes modeled at request and their chosen outfits tailored to fit.

Set up in 1907 in Dallas Texas with $25,000 by brother and sister Carrie Neiman and Herbie Marcus, after a few initial hiccups ( the store and all it’s contents burned to the ground in 1914) the store went on to become the most lavishly furnished and opulent department store of its kind. By the 1930’s and with a global depression, Neiman Marcus moved away from exclusive designer wear to more affordable ‘American’ clothing.

One lovely nugget of a story is that the company founders’ other option in 1907 with which to invest their $25,000 in was the fledgling Coca Cola company! Stanley Marcus, the son of Herbert and for many years the CEO, loved to joke that Neiman Marcus was founded on “bad judgement”.

Stanley Markus started at the bottom in his fathers store as a stock-boy in 1925 but soon became the leading light in the company’s future.In 1939 he had started annual Christmas Catalogs which women across America drooled over from Septembers onwards. Another innovation of Stanley was to introduce the idea of ‘His and Her’ gifts. He launched an annual Fall Fashion event – The Neiman-Marcus Exposition, which was a tremendously glitzy affair attracting the Oil rich elite of Texas as well as Hollywood stars and European buyers.

During the war Stanley was asked to join the War Production board and – like Norman Hartnell in Britain, he helped devise textile regulations to divert more material to the armed forces whilst maintaining glamor in women’s clothing back home.
With the shortage of silk and the new Nylon during the war, Marcus devised the ‘Neiman Marcus Hosiery-of-the-Month Club‘, sending out two pair of much prized nylon stockings in the latest fashionable colors to female charge-card customer. His heart was definitely with the women on this one. His devotion to ‘fashion rights’ went as far as publicly supporting three 1960s students who were barred for having long hair. He was the first southern retail boss to hire black women in his stores in the early 1950’s – against the wishes of his shareholders.