Necessity drives the future of Style – 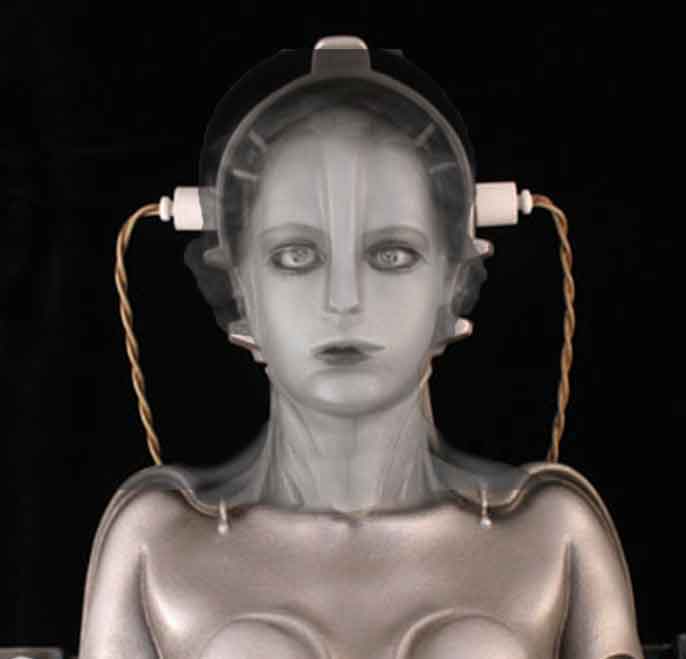 In 1902, a series of French postcards entitled “Les Femmes de l’Avenir” or Women of the Future, proved conclusively that – trapped as we are, in a linear dimension, few among us possess gifted insight into imagining the modes of tomorrow ( the pirate is my personal favorite !). Think of almost any movie you have seen set in the future, and the styles worn by the protagonists are stuck resolutely in the modes of the present.

Metropolis, Fritz Lang’s 1927 dystopian masterpiece was panned by many, even by that great futurist H.G Wells who criticized the films lack of foresight.”Even the motor cars are 1926 models!” he said. Despite its many obvious flaws however, the film gave us one unforgettable glimpse into the future of design – Brigitte Helm’s metamorphosis from machine to woman. As a visual metaphor, it foresaw the future blending of technology and humanity. 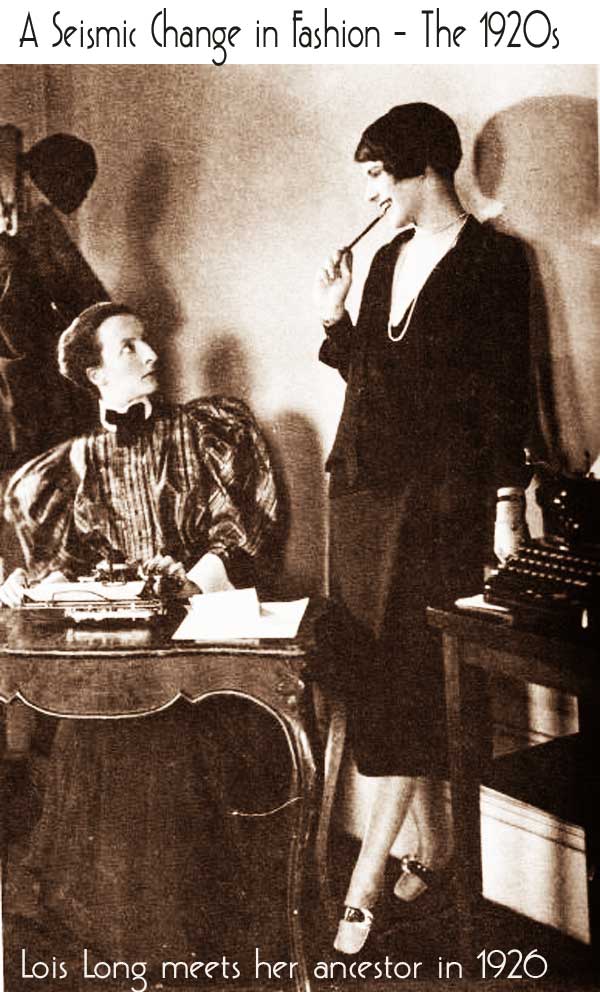 The Edwardian era however did herald change, and the days of the corset and ‘a turn about the room’ were blown away by the shattering events of the First World War. The shift in women’s mode between 1909 to 1929 is truly seismic. Going well beyond the usual changing trends of ‘line’ and ‘silhouette’ it reflected the needs of the new post-war generation which were now changing with increasing rapidity. Female empowerment demanded it of course, but the rise of technology, and the Capitalist drive towards consumerism which resulted, brought about a new ‘carbon democracy’, where people now had the right to change, not only how they looked, but who they were, all thanks to Mother Oil.

By the 1930s, Dupont was producing new polymers to a dizzying extent. New wonder synthetic fabrics like Nylon could mold perfectly to the body, and with the noted sensory pleasure derived from wearing Nylon, a woman’s relationship with what she wore was beginning to change. Oil was the dirtiest thing on the planet but soon everyone was wearing it. 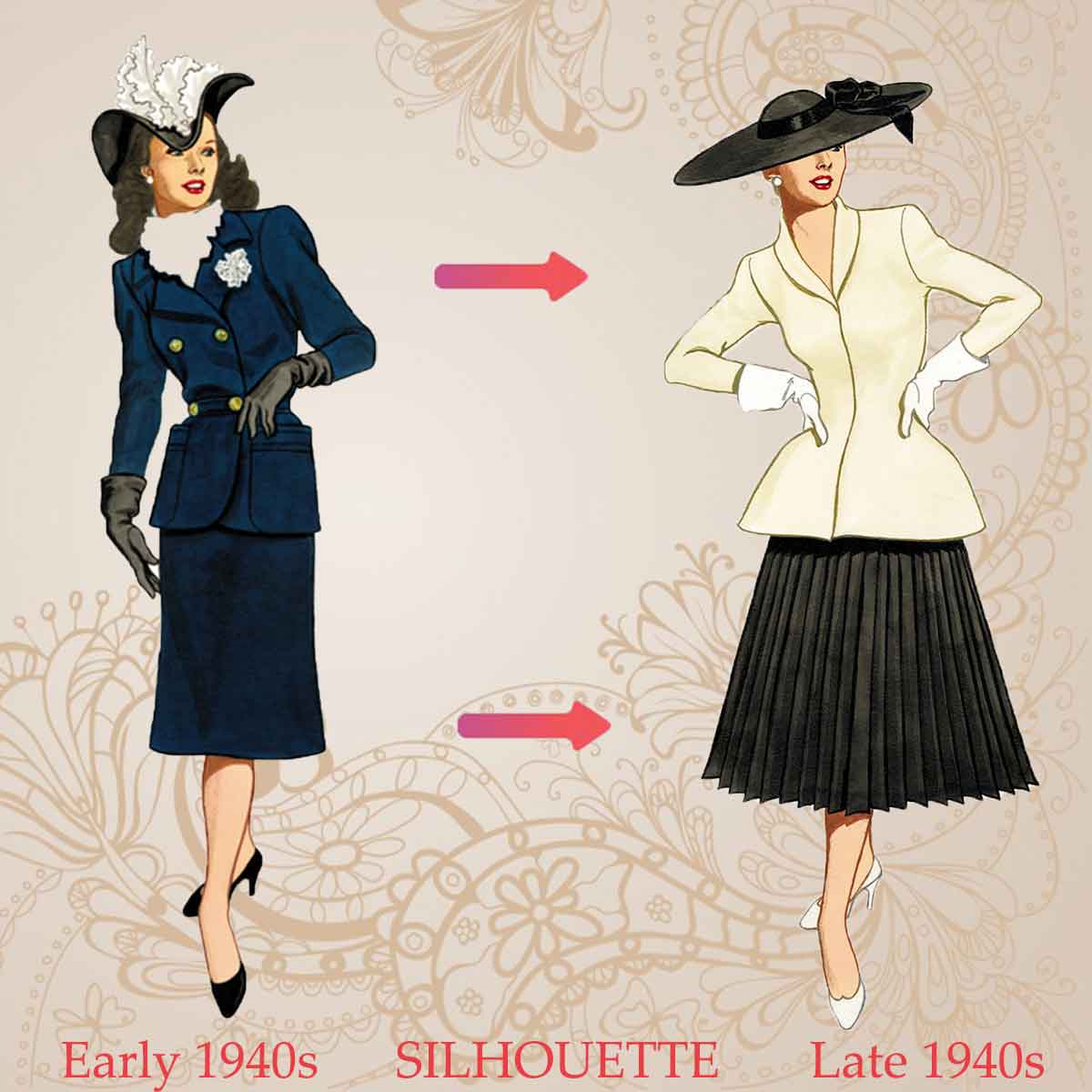 The 1940s brought another industrial driven war, and with it, major advances in technology: the Internet, WiFi and the Computer. There is much written ( as we have done on this blog) about the New Look of Christian Dior. It represented in my opinion the first retro style; harking back to the billowing silhouettes of the Edwardians but with improved fabrics and even better haircuts. Capitalism was booming, and the Madison Avenue ‘Mad Men’, led us to believe that anything was possible and moreover, that we all deserved it.

Through the 1950s, there were countless ‘look to the future’ newsreels, which once again proved that we generally got it hilariously wrong when it came to design or style.

Sci-fi movies, TV series and comic space art were no better, generally offering some sort of spacesuit and technicolor hairdo as the go to style of the future, with the usual female objectification added for good measure.

Alternatively, the 1968 movie 2001 – A Space Oddysey envisioned Orwellian gender neutral styles and people with no apparent sense of humor whatsoever, apart that is from the psychotic HAL 9000. The films clothes may have had the look of contemporary space-age stylists Pierre Cardin and Andre Courreges, but were in fact designed by Hardy Amies.

While Couture designers played about with one silly trend after another – from bell bottoms in the 1970s to Michael Jackson’s shell suits of the 1980s – it was the cultural advances of an increasingly tech driven world that became the real driver of fashion design. Nasa created spacesuits which were self cooling. The Space Program also gave Velcro a huge boost, when astronauts began using it to secure loose objects to their suits and in their spacecrafts.
Necessity was truly the mother of invention when it came to going to the moon!

Fashion trends veered from Vivienne Westwoods late 1970s punk rags to the increasingly dystopian/retro visions depicted in Ridley Scotts Bladerunner in 1982. Sean Youngs 1940s look and the replicant Rachel’s post punk style gloomily predicted that by the mid 21st century we would be running out of ideas.

Since the new Millennium, wearable fashion – such as Apple designer Jonathan Ive’s visionary Ipod, has blurred the lines of what constitutes necessary daily wear for all genders. It goes without saying that phone-charging skirts are just around the corner.

So what comes next? A shirt you can pull down into a dress? A blouse that reflects your mood? Clothing that adapts to your ideal temperature? Socks that can find their missing partner? It won’t be long before we look back in surprise at how little our clothing once did for us in the past. And will these new styles define the era as they once did? Perhaps we’ve already peaked in iconic looks, and we’ll be seeing more and more of the retro future looks depicted in Bladerunner – heavy rain included!

Designing for the future: trends we need to consider now

In 2012, Lacoste launched a Facebook campaign looking for new ideas for their polo shirt, and the resulting suggestions from around the world all reflected one word – need!
While there is always a place for that frivolous hat or frock, the real driver now of fashion design is not from the dusty corridors of Paris couture houses, but from the hive mind of humanity. With designers now taking their cues from the consumer, creativity is targeted more into mass-marketing clothing than into designing them. Could this be spelling the end of the age of fashion?

The crucible of fashion design has always been the fabric. In the 1920s the great couture houses all bowed to the textile manufacturers. Almost as soon as the last season was over, Chanel and Vionnett could be seen wending their way to the likes of Rodiers in Paris, to see what they were coming up with next. Today innovative firms such as BioCouture, founded by London designer Suzanne Lee, who manufacture their clothes from bacteria and even algae could be the pioneers of post oil age clothing. Lee imagines clothes that could literally be ‘living fabric’.An Italian company Corpo Nove created a shirt from titanium which reacts to change in temperature, with the fabric releasing its wrinkles when exposed to hot air!

The clock is ticking on the dominance of oil and its amazing derivatives. Climate change is a reality, at least for those who accept that the Earth is still in fact round, and that empirical climate science is not prone to hysteria. What we design will have to to accommodate this reality, and the ‘climate neutral’ clothing we will soon probably be wearing, will be the result. I wonder though, if do we make it to the end of this century, will we have the same level of nostalgia for 21st Century design as we do now for the 20th?

1 thought on “The Age of Fashion comes to an end”