Its 1929 and after Colleen Moore completes her first stage play “On the Loose” she plans to change her 1920s hairstyle dramatically to herald in the 1930’s! It’s a boyish bob, much like that of Kay Francis.
And what an adventure this will be for Colleen, whose Dutch haircut has endured for many years. I was a definitive part of her screen personality! She wants to come back to the screen as a different woman, with a totally different boyish bob.

Miss Reno, of the staff of Charles of the Ritz, at the Ritz Tower, New York, is helping Colleen to decide by means of wigs and by experimenting with her own hair.
But it’s a difficult decision for Colleen to make. if you are one of her admirers you might care to suggest here what style might be most becoming to her.

First – here’s Colleen as we know her. She made this 1920s hairstyle Dutch cut as famous as the long, blonde Pickford curls.

Windblown Bob to a Boyish Bob

The windblown bob, shingle hairstyle close in the back, with ragged edges pulled forward on the face, might have been created for Colleen Moore, so well it does emphasize her pert little face. I am inclined at the get-go to vote for this one! 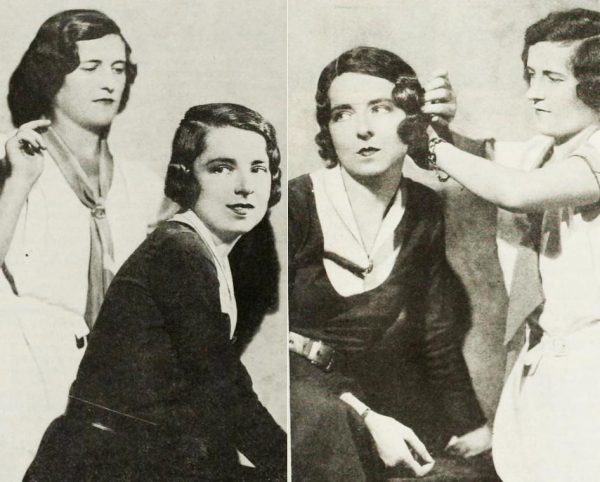 There is simplicity in this bob – entitled “The Debutante”. The long ends are tucked into a small roll at the back of the neck.That’s Reno with her, from Charles of the Ritz! To the right, Reno shows Colleen another variation. She parts the hair high on the right side and draws it down flatly from the part into a few close but soft waves!

Well now, whoever would have thought that a boyish hair comb would turn a cute Colleen into such an ultra-sophisticate? Kay Francis had better look to her laurels! This is Colleen’s own dark hair, smartly brushed back.

Good luck Colleen with choosing your new becoming hairstyle for the new decade of the 1930’s. Every girl in the land is with you in spirit as we search for the holy grail of haircuts to see us into the new era!