From the Library of Congress, two films of 1940’s hairstyles for black women. Rare gems, promoting an inclusive, though not entirely pluralist vision of American women during WW2. 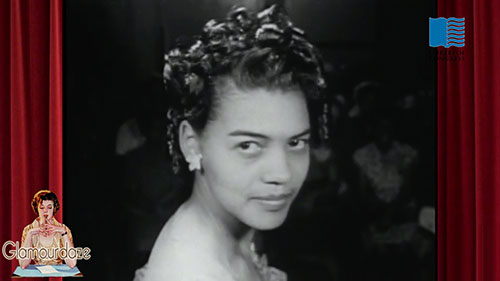 There is precious little film footage of black women’s fashion and style during the 1940’s. Some years back we featured the amazing photography of Charles Teenie Harris. The Teenie Harris archive is a jewel in a desert. But film archive film of ordinary black women is much more difficult to access. Why? Because there wasn’t any. Well hardly.

The first film features exclusively African American women, toying with some new Victory Rolls to celebrate the end of WW2.
It is an excerpt from All American News Inc. Library of Congress, Motion Picture, Broadcasting, and Recorded Sound Division.

The second film, from an All American News Inc, courtesy of Library of Congress is a short hairstyle feature. It’s inevitably sexist, as was the more of the times, but it does feature women of mixed culture. 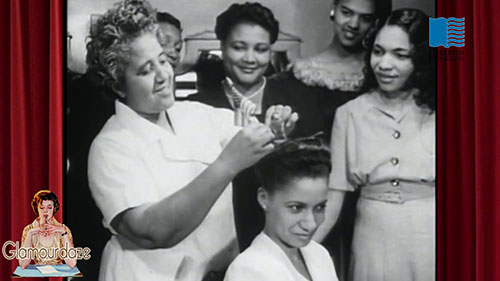 During the war in the 1940’s, not only was there a strong cultural resistance to women going to work in traditional ‘male roles’, but African American women faced an even deeper bigotry. Though there was often solidarity between women in those difficult years, many still faced racism.

The government promoted women as a new stronger feminine prototype. The most remembered and celebrated was Rosie the Riveter.
However, almost without exception, the imagery in magazines, and propaganda posters were exclusively of white women.
These films show a small attempt towards the shift American cultural history. It took decades before civil rights were recognized in the so called ‘land of the free’. 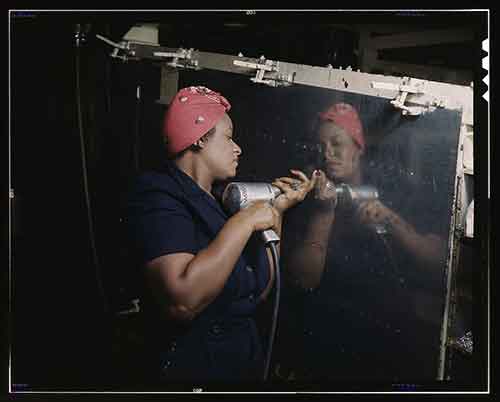 Munition factories, and later the WAVES and the Women’s Army Corp WAC,  accepted women of all cultures. A lot changed in those five years. In 1940 he US military was segregated, African American women only serving in black-only units. Black nurses in the Navy and Army were only permitted to tend to black soldiers. By 1945, those lines of demarcation were beginning to crumble.

One of the more shameful episodes in the Roosevelt years were the internment camps for their own citizens. The prejudice toward Japanese American women meant they had little to no access to jobs.