Glamour Girls of the US Navy – 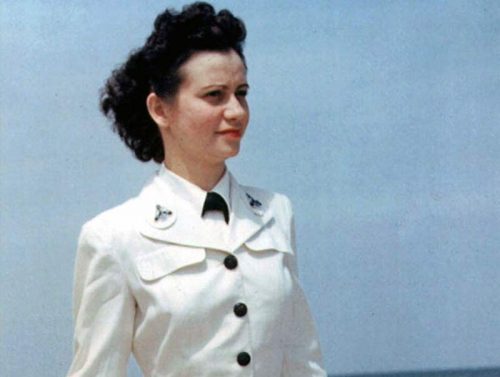 Women Accepted for Volunteer Emergency Service, otherwise known as the WAVES brought thousands of young women in to the Women’s Reserve of the U.S Navy. They were assigned full military status, including ranks, and notably were the first to enlist African American women, albeit in the latter years of the war. They earned $50.00 a month and her uniform was the envy of all, created by the fashion house of Mainsbocher in New York and had both a winter and summer outfit.

The winter uniform was made of navy blue wool, white shirt, navy tie and a gored skirt worn with Oxford shoes and black pumps for evenings.

She wore a single breasted jacket and her accessories included a brimmed hat, black or white gloves and black purse. Also a gabardine belted coat.

For summer, the Wave uniform was in white, lighter in weight and worn with white shoes. These were worn with Nylon stockings ( an extra luxury for WAVES or SPARS). In 1944, a newer grey and white striped seersucker was added for her summer wardrobe. She was also outfitted with dungarees and several pairs of slacks.

You can now download a unique book owned and read by WAVES and SPARS during the war, which is included in our mammoth bundle of 1940s Wartime Women Guides.

The other iconic group were the SPARS, the women’s reserve branch of The United States Coast Guard (USCG). They asked no privileges and served their country with honor and commitment. The average SPAR was 24 years old, a college graduate and brought with her some years of experience in several areas vital to the Coast Guard. When off duty, SPARS often volunteered to be assistant nurses. Like the WAVES, they also enlisted African American women, though these were only few in number.

Their uniforms, like their WAVE sisters,, were quite glamorous, also designed by Mainsbocher in New York. The insignia’s were different but other wise the fashion was exactly the same, with both winter and summer uniforms. The Winter uniform of a SPAR consisted of navy blue, jacket and six gored skirt, worn with nude Nylons, Oxfords or pumps (black). Accessories included a brimmed hat, black purse and gloves and accompanying coat. The Summer uniform of the SPAR was exactly the same in design, but in white Palm beach worsted cloth, worn with white Oxfords and pumps. They also had a white striped seersucker dress and matching jacket.