Women the world over are now copying the styles set by today’s stars. Hollywood is giving Paris a run for its money. In this 1920s fashion report you will see the latest frocks,hats, sportswear, afternoon-wear and footwear of the stars.
The studio designers go to Paris yearly but come back and adapt line and colour to the demands of the fair ladies of the silver screen – as these women have their own tastes. The film queens don’t take dictation from any so called stylist. they are individual in their choice of on screen wardrobe as they are for their own personal clothes.

How to wear the chic little nose veils so popular in Hollywood this Spring. Mary Duncan drapes hers close to the hat but allows plenty of fullness across the face. The ring she wears is worthy of comment, since it is the one she is never without, wearing it with sports as well as with evening and street clothes.It boasts one black and white pearl.

The fifty fifty hat – that’s Nancy Carrolls contribution to the Spring mode. It is made of light tan straw and dark brown felt. The combination is carried out even in the narrow brim. Hats with brims that roll away from the face are the last word. The soft felt finds favour.

The Theater hat has come into prominence in Hollywood since it was introduced by Olga Baclanova. This wrapped turban is trimmed simply with an emerald and crystal ornament. Graduated pearl ear-rings are worn with this stunning accessory.

An ensemble of accessories, Gwen Lee chooses bag, hat and necklace that match. The hat is of black felt with the up-turned brim – now in such vogue, held in place by a silver and onyx ornament. The bag, also of felt, is decorated with an ornament similiar to that worn on the hat. Her choker necklace is of silver and onyx.

A youthful and smart hat for Spring worn is by Loretta Young. It is a modified bandeau style, the bandeau being of silver mesh and the hat of gray felt. The upturned brim is held by a tailored bow fashioned of moire ribbon.

“Chic” according to Corinne Griffith, is just another way of saying “simplicity.” That’s why this hand-made felt hat is her favorite of the season. It has perfect line for her face. the brim is turned up at the front, with one side rolled down and looped in an opening cut. It is “simplicity,” for it has no trimming of any kind. 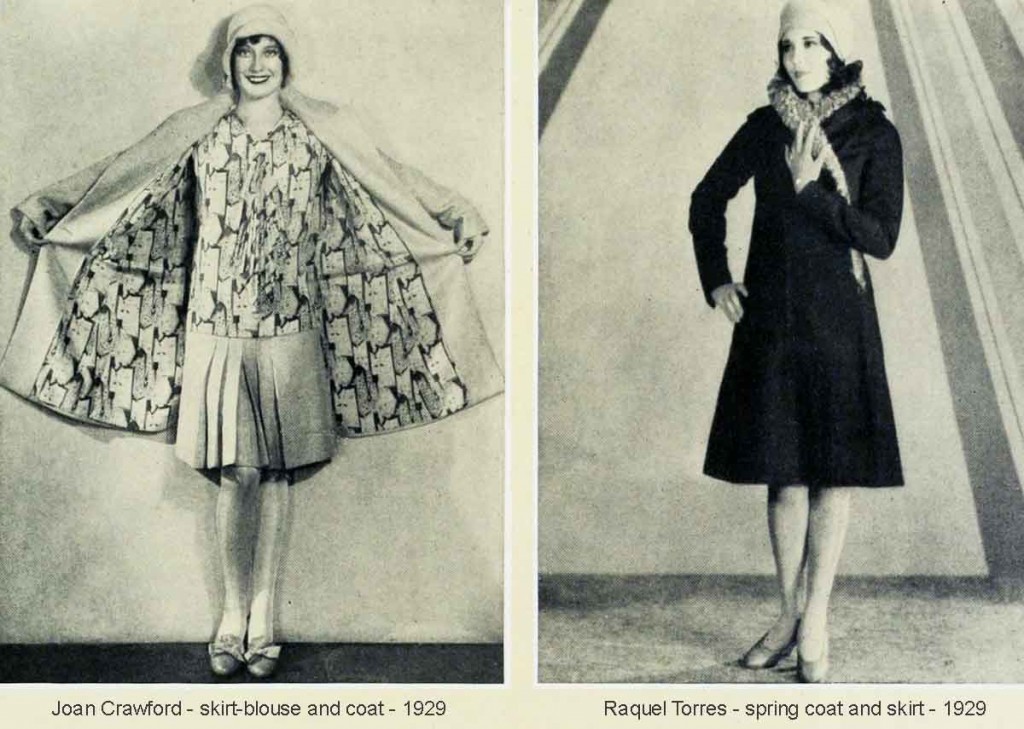 An interesting interpretation of the costume suit, worn by the lovely Joan Crawford, is shown above left. This is a smart, three piece model, cut along somewhat fitted lines. The skirt and coat are silver-tone basket-weave. The skirt is pleated and the lining of the coat matches the gay silk blouse.
The new princess silhouette suited to the youthful figure. This attractive fashion revival is worked out in Oxford covert cloth, with krimmer collar. Raquel Torres wears this chic Spring coat and its fitted bodice and flared skirt accentuate her slenderness. The coat has a lining of silk satin.

The term “sports clothes” no longer suggests those severely utilitarian outfits for tennis or golf. The classification has been widened by stylists to include, literally, all outdoors. You are suitably dressed for luncheon in a sports costume. Sweaters and skirts are seen even in the afternoon in Hollywood, at tea and informal parties. And no wonder, when they are as ornamental as these two sports ensembles.

For the polo game or the whippet race, Gwen Lee selects this two piece sports costume of French jersey. The frock, pleated at the front of the skirt and trimmed with a flat tie at the neck-line, is of beige and red in a small geometric design. The two-button jacket is of red, lined in the same material as the frock. Beige hat, beige gloves and an envelope in snakeskin complete the outfit.
To the right – a stunning sports frock in black and white, worn by Anita Page. the blouse and knife-pleated skirt are of white Georgette and the blouse is trimmed with angora embroidery in white and black. Black and white slippers are worn to complete this pretty costume.

Fashion demands a lovely ankle line, and even in wet weather, a girl must obey the rules of Madame Mode. To help her, she has a host of pretty choices of ‘shoe protectors’ which allow a girl to step from the street in to the drawing room without losing her ‘chic’.
Myrna Loy wears her new Spring protectors. These have two types of heel. They can be worn with the turn over cuff up or down and have elastic linings for comfort.
Bulky methods of footwear protection have departed, along with tandem bicycles. Mary Brian in her new glove-like shoe protectors intended for the ever-changing Spring weather. These have concealed slide fasteners and are on and off in a jiffy.

Nowhere in the world are women as anxious to be beautiful as they are in Hollywood. The stars know every trick of keeping themselves fit. In their homes they doscard tight, heavy shoes and wear only the most comfortable boudoir slippers. And this year they have gone for simplicity. The elaborateness of the negligees demand plain slippers. This is the indication for Spring 1929.