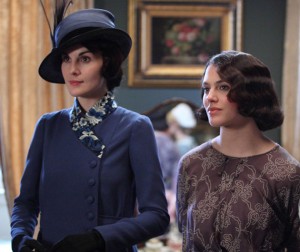 Glamourdaze is delighted to have been invited by PR folks of Downton Abbey – The Project Factory – to contribute to their new Pinterest board ” The Downton Abbey fashion Era ” We’ll be writing the odd post here on Glamourdaze and posting regular images, videos and links on Pinterest including a ” Get the Downton Look”  So do look out for them.

Now that the grim war years of 1914 to 1918 are well and truly behind us in Downton Abbey – new costume designer Caroline McCall [ Susanne Buxton having gotten series 1 and 2 off to an Emmy winning start ] has everyone gasping with not one but two weddings – beautiful gowns and stunning Lanvin inspired bridesmaid dresses [ Lady Edith’s wedding ].

The key changes in the looks of the three sisters are of course the main attention grabber. Straight off the rails from Paris France, we can expect to see the dress styles of Madame Vionnet [ the inventor of the bias cut dress ], Jeanne Lanvin, Chanel, Jean Patou and …well the list is anyone’s guess. The 1920s was the fashion era when hemlines rose, busts flattened and waists dropped and corsets almost disappeared – at least among the younger generation. One can assume that Maggie Smiths redoubtable Dowager Countess of Grantham is still trussed up in one, judging by her raised eyebrow and disapproving stares. So do bookmark Downton Abbey Fashion Era on pinterest.