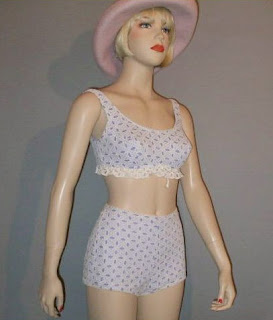 This rare vintage fashion newsreel from 1961 features some beautiful swimsuit designs from amongst others – the famous French-born American fashion designer – Oleg Cassini. His designs for the First Lady Jackie Kennedy became known as The Jackie Look and was a massive fashion influence in the early 1960’s.

His Sheath dress [ a figure hugging which falls around the knees ] is still a standard and the current First Lady Michelle Obama is a fan.He became a household name in 1961 [ the year this swimwear film is from ] after Jacqueline Kennedy appointed him as her exclusive couturier.His nickname in the press was “Secretary of Style” .Soon women all over America and beyond began copying the simple geometric look of Jackie’s dresses in sumptuous fabrics with pillbox hats and elegant coiffures.Amongst the Hollywood stars he dressed were Grace Kelly, Tippi Hedrin, Gene Tierney [ his wife ], Rita Hayworth,Faye Dunaway – the list goes on.

What Katie Did incidentally are launching a beautiful range of 1960s influenced swimsuits for this summer!

The famous costume designer Edith Head described Cassini as the “single biggest fashion influence in history”.Cassini is up there with Dior and Chanel. So enjoy this little treat of his stunning swimwear from that magic year of the Kennedy’s – 1961.

” A new season brings stylish swimwear by the worlds foremost designers.Contrasting insets form striking bodice treatment and slim flattering lines in this Oleg Cassini creation for Peter Pan.We’re offered a look at the drawstring bikini as only the French can interpret it. Shown alongside is the French influence in the sophisticated Little girl look.Brass buttons and military treatment in youthful and ultra feminine swimsuit – also by Cassini for Peter Pan.In the same distinctive manner as the sheath, with its accompanying mother of ocean pearl buttons. A trim addition to the beach scene! Again from France – a swimsuit of cotton, woven so that it is transparent in the hand, opaque when worn ! In a season of jungle print – this is definitely Haute Couture ! ”

Head on over to Modcloth for their latest vintage inspired swimwear range for 2012.

Learn the art of make-up styles from the 1920’s onwards, as actually taught to womn of those glamorous years .Beautiful vintage beauty guides available for Instant download now from Vintage Make-up Guide.