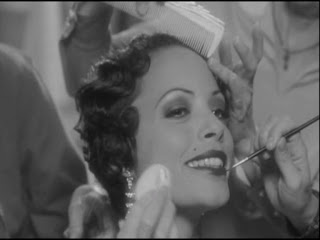 Glamourdaze has already written in-depth posts on 1920’s Make-up and 1920’s Hairstyles, and we were delighted that Julie Hewett – the Make-up Designer for The Artist has agreed to be interviewed by Glamourdaze . More on that soon. In the meantime we’ll take a quick look at her work on this amazing film.

To achieve a genuine and convincing make-up look for the 1920’s era, Hewett had prepared by studying old black and white films. Interestingly, during shoots the monitors on set were in black and white which helped her perfect the luminescent looks of her stars.

Instead of pale makeup – which one would have presumed, Hewett kept the skin tones warm. Clearly an experimental process, she strove to achieve a natural look for the women. Peppy Millers lipstick had to appear to have shade and color – as opposed to being black.”Your eye tells you to put a certain shade on, but you have to do what works for the black-and-white translation.” she said. Julie also has her own line of make-up available from her website Julie Hewett.net

Peppy Millers hairstyles created by Cydney Cornell, again was an experimental process, running several tests of famous silent divas, such as Louise Brooks and Joan Crawford. As it turned out Cornell said “Her hair was a combination of everyone because we were working with a particular actress and we were going for authenticity!”

The Artist – A tribute to the real silent screen divas

To achieve the genuine 1920’s Flapper Look, visit Vintage Make-up Guide, where you can download beautifully restored beauty guides from that era.