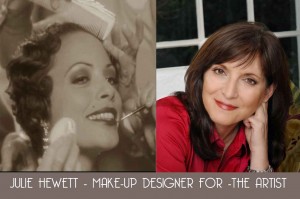 An exclusive interview by Glamourdaze with Julie Hewett – Award winning make-up designer on the Oscar laden THE ARTIST.

First of all on behalf of our readers, a belated congratulations on your Bafta Award for Makeup design in THE ARTIST.
Your list of credits on films from the brilliant Grifters in 1990, American  Beauty in 1999 to Make-up Designer in the mesmerizing The Artist, apart from being impressive, shows that you are consistently involved in iconic movies that are highly  original –  working with great cinematographers and production designers. Would you have been a fan of the silent film era before The Artist ?

JH – Yes I have been a big fan of the silent era. I am obsessed with Golden Age Of Hollywood since I was little. I actually worked with Lillian Gish !!!!!  and Bette Davis in 1988 or so. It was The Whales of August. It was one of my first films and their last. I got stories of that era first hand. I hung onto every word.

What a great start to your career working with such icons ! You started out at the famous School of Fashion at Parsons in New York. Did you
learn your full make-up craft there?

JH – At Parsons I was pretty inept at sewing – I was in the fashion department – so I took refuge in drawing faces all the time.  I did fashion for a while but soon learned that painting faces was my true passion. I worked freelance for all the cosmetic companies doing makeovers which helped me develop my own “palette” and to work quickly.

For any of our readers who are interested in doing make-up for film, how did you get  started and how did it develop to the role of Make-up Designer?

JH – I would definitely advise any aspiring artists to just do it ! I started with small independent films and just kept sending my resume to anyone and everyone. It worked. It took 10 years to work consistently.

The Artist is innovative in many ways, and while there have been a few notable films like Schindlers List and Woody Allens Manhattan shot in black and white – your role was to recreate an entire era of film make-up style for black and white, that was unique to the 1920s and early 1930’s. What type of research did you do ?

JH – For THE ARTIST…  I watched many silent films for inspiration. I was very familiar with these periods. The challenge was to work with the director of photography to translate it for this technology.  The brows and the lips have unique changes each era. I had  to master both. I studied those old photos!!!  I had done black and white before on THE GOOD GERMAN so I had some experience.

Did you work out your palettes prior to shooting or was it an ongoing experimental  process during the shoot?

JH – It was a trial and error to get it just right!!  We create palettes of lips and matte eye colors to use on everyone.

You achieved a really luminescent look for Bérénice Bejo on The Artist. If it’s not giving away any trade secrets, can you tell us what make-up you used to help create Peppy Miller. ?

JH –  My own range of NOIR lipsticks.. COCO and SIN were featured on Peppy. Her foundation was Armani 6.0 . I left bits of shine to give that luminescent feel.

Now that’s interesting to know. You are  in the company of the great Max Factor himself – who was an early make-up innovator in the golden age of Hollywood. The Noir range of lipstick colors are very glamorous looking – from their rich red hues to the beautiful golden tubes they come in.
[ Editors note – As a point of interest Gabriela Hernandez of Besame Cosmetics  provided the glamorous cosmetic products seen on the vanity table in the famous make-up scene in the film! Chosen because of their authentic look. Check out her interview on CNBC ]

You also worked with hairstyle designer Cydney Cornell before on American Beauty – who would you have conferred with mostly, during the shoot?

JH – I conferred  daily with Cydney Cornell rock star hairstylist and our genius director and DP.

Who are your own personal beauty icons from the silent era?

JH – I love Theda Bara, Gloria Swanson and Lillian Gish. Check out a book called FOUR FABULOUS FACES. It was my inspiration!!

Berenice Bejo’s red carpet look at the Oscars was flawless. You also did her make-up for that very special day. It must have been a very emotional experience, but there you were – still hard at work ! What make-up did you use for her that evening?

JH – Berenice wore a lot of Christian Dior on the night of the Oscars… She loves that brand. She also loves my lipsticks too!!  She loves OONA NOIR (named for Charlie Chaplin wife)  and ANNETTE !

Can we see more vintage  inspired make-up from Julie Hewett in the future?

JH – I am working on new products for my brand. I just  completed an “oil free make up remover” called BANISH ! Look for my specials on facebook !!

Our female readers are clicking over there now as we speak !
Finally Julie – You have recently been working with Scarlett Johansson who portrays Janet Leigh in the making of Alfred Hitchcocks Psycho. Hitchcocks leading ladies were all so glamorous and iconic looking – even when they were being chased by birds or knife wielding pyschopaths ! What was it like working on the recreation of that memorable shower scene? 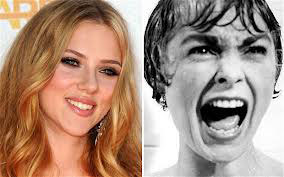 JH –  In the upcoming HITCHCOCK I recreated the looks on Jessica Biel and Scarlett Johansen. I translated them to color. It is going to be amazing. We did the shower scene and her make up stayed perfect.!!

That was Julie Hewett – Academy Award winning makeup designer on THE ARTIST.  If you want makeup tips from the master herself – check out Julie Hewett’s Facebook page and Twitter pages and of course her makeup site  Julie Hewett !