The perm: from conception to current day- 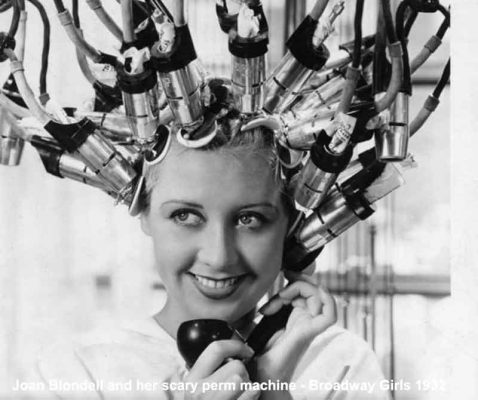 The history of the perm dates back as far as the late 19th century, but with data showing that 1.67 million Americans are still using home permanents and relaxers at least 6 times a year, the fashion is still prevalent. The changes in technology and attitudes towards safety over the years have impacted the methods and popularity of perms. From the early days that involved some frankly torturous heat and chemicals to a more modern day approach towards reduced chemical irritation and a better understanding of hair care and the damage various styling methods, such a perming and relaxing, can cause.

The development of the perm in a nutshell

The first suggestion of the perm was the long-lasting hair waving technique, invented in 1870 by French hair stylist, Marcel Grateau. A wave machine, producing even longer lasting results was premiered by Swiss hairdresser Karl Nessler ( Charles Nestle) in 1906 in England. His system involved combining the chemical process with the thermal process. While it was a fairly unwieldy machine, it was able to permanently curl the hair.

Machinery was not the only significant change to occur throughout the history of perming. In 1941, Evans and McDonough were the first to use thioglycolic acid in what was known as a Cold Wave, which revolutionized the permanent waving industry and paved the way for the modern day perm.

Important steps with the experimentation of styling techniques came in 1976 when Jheri Redding used toothpicks when rolling the hair. This resulted in a very tight curl and was a style that became very popular in the mid 50’s and throughout the 60’s.

The history of perming ethnic hair

In 1928, Marjorie Joyner, an African American hairdresser, patented her dome shaped helmet which used an electrical current to heat hair that was clamped in one-inch sections. It was a more compact machine that worked to straighten very curly hair. She developed it to help African American women who wanted to change the tight curl of their hair to a wave, although it also proved to help with Caucasian women’s hair, adding curl to their straight hair.

It became a fixture in all hair salons by the 1930s and even featured in Hollywood movies. Garrett Morgan is also credited with being a great contributor to the development of the perm for ethnic hair, creating a cream in 1913. He was the owner of the Hair Refining Company where their number one product was chemical hair straightener.

The improvements to the perming process, such as less irritating chemicals and better machinery along with development in maintenance products and the ethnic hair care market went through a huge growth spurt that continued well into the late 1980’s. While continued perming can leave the hair in a very dry state, you can generally reverse this damage with deep conditioning shampoos and leave-in treatments to restore your hair health.

Permed hair can look amazing and the stages that it has gone through over the years to help men and women achieve a new look has been vast. Safety aspects, both during the perming process as well as taking care of your hair afterwards has also undergone huge developments. However, while chemicals do tend to cause a lot less irritation these days, it is important to remember to still take care in ensuring that it does not come into too much contact with the skin.