April 1911 saw the first cited 20th Century fashion photo shoot – and some of it in color! – 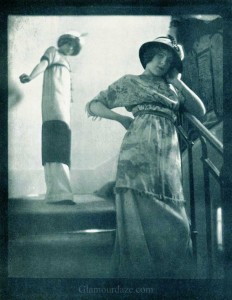 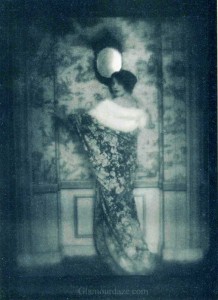 The Spring collection from the then hugely famous Paul Poiret was published by the French magazine “Art et Decoration” in an article called L’Art de la Robe ( The Art of Dress)  by Paul Cornu. Gowns by Paul Poiret, illustrations by George Lepape and most significantly a young unknown photographer called Edward Steichen who photographed the ‘mannequins’ wearing Poiret’s gowns. By all accounts it was Lepape who knew Steichen and had introduced him to both Poiret and Lucien Vogel, the magazines editor. 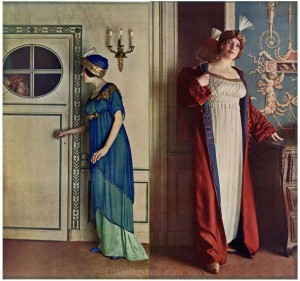 It wasn’t until a decade later that Steichen’s name began to be known as a staff photographer for Conde Nast, but even in these unique photographs, you can see a distinctly ‘modern’ pose by some of the models. 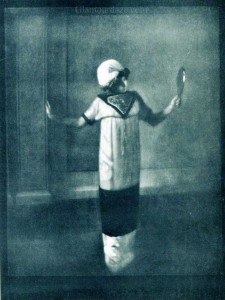 Complete issues of Art et Decoration are extremely hard to find now. The photos you see here are from several loose prints including two color pochoirs of Steichens photographs taken for The Art of Dress in 1911 that we got on Ebay. 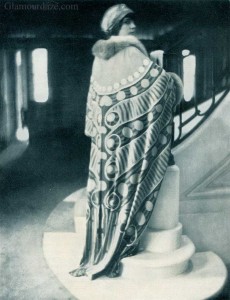 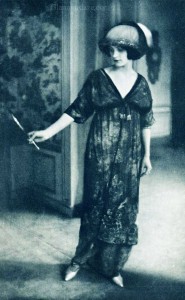 The FIT Archive blog Material Mode – have procured the original full April issue of Art et Decoration and published their own blog about it. April Calaghan informed me ” If you’re a collector of pochoir prints, you will be excited to hear that our book Fashion and the Art of Pochoir is forthcoming (published by Thames & Hudson) in 2015. It will contain more than three hundred pochoir fashion illustrations from between the years 1908 and 1922″ So thanks for that April. 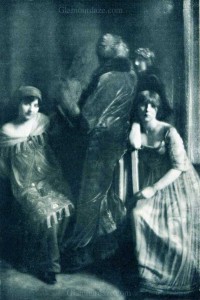 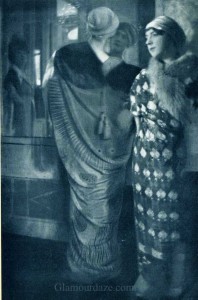 The name of Paul Poiret still ranks as the 20th Century’s first great fashion designer. Certainly as a self publicist there was none to match. His appreciation of presenting women’s fashion as ‘art’ had already heralded the modern world of fashion advertising a few years earlier. In 1908 he published Les Robes de Paul Poiret with stylised colorful drawings by Paul Iribe. Les Robes was a major breakaway from the stitch by stitch illustrations of the past. Iribe’s expressionist drawings evoked femininity and sensuality. The era of the Art deco fashion illustrators was born. Names like George Barbier, Charles Martin, George Lepape, Andre Marty, and Pierre Brissaud, and later Erte soon became as famous as the the designers whose garments they illustrated.

In Poiret’s words “A garment is like a good portrait—the expression of a spiritual state “.