According to FITs excellent style blog Material Mode, back in the 1940s and 1950s, L’Officiel de la Couleur des Industries de la Mode and their sister publication, Cahiers Bleu, served as fashion trend forecasting publications for the fashion industry.
Several pochoir prints are re-produced including this fascinating color chart of the couture designers. 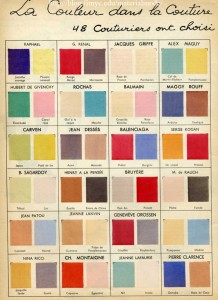 All the big names in fashion are featured like Jeanne Lanvin,  Jean Patou and Maggy Rouf, and of course Dior, Schiaparelli, and Balenciaga along with many long forgotten names, some perhaps who were the instigators of style trends, but were eclipsed by better financed and bigger names who often – lets face it – nicked their ideas.( fashion houses had no ethics in that matter). It’s interesting to read also that even in the 1950s, the fabric manufacturers were shown the same reverence as the designers.

As for the 1920s fashion designers , they were kings and the king of kings in Paris was Rodiers. Read our ‘as it happened’ fashion report from 1921 in Paris, where Ladies Journal writer Mary Williams painted a great picture of Madame Coco Chanel, Monsieur Worth et al,  creeping furtively up to the entrance of Rodiers, “For on fabrics, their fate all depends.”

In Cahiers Bleus, while like its sister L’Officiel de la Couleur, the mission was to predict the new seasons colors from the great couture designers, it also presented swatches of actual fabric used to create the outfits pictured

Check out Material Mode to read the full post.