Edwardian Corsets and Lingerie in 1909 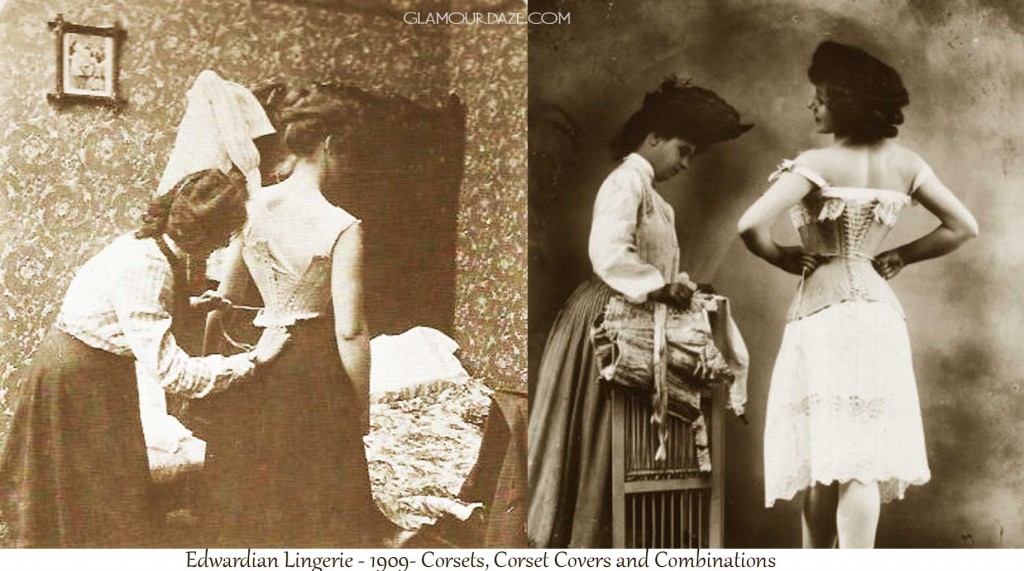 Illustrating a 1909 Fashion review of the latest Edwardian lingerie out for that Autumn season.

A special thank-you to Lori and Matt Knowles for their wonderful photos of Edwardian lingerie. They are still looking for models for future shoots, so do pay them a visit. Also a shout out to two blogs – Fabric Fixation and WW Creations, from who we feature an image.

The severe waist pinching corset was going quickly out of fashion by the early 20th Century. By 1909 the straight front corset, and its popular S Bend achieved a new silhouette which served to enhance, rather than alter a woman’s natural hourglass shape, thus doing away with the severe pigeon front look [ chest out and bum thrust backwards ].

Corsets were longer in length. They flattened the bust to give a smooth silhouette in the front. Most came with detachable suspenders which were replacing the old garters of the past.

‘Corset covers’ originally were worn under the corset, but by the 1909, were used as a ‘protector’ and worn over the corset, while the softer chemise slips or petticoat slips and drawers were worn ‘under’ the corset. A complicated business!

Stockings were increasingly adding glamour to the Edwardian girls wardrobe, with deluxe evening hosiery coming with elaborate lace inlays and embroideries. Though generally covered, a woman’s stocking might flash into the view of an admirer during a dance, or whilst sitting down.

First published in the Paducah Evening Sun in September 1909.

The frilly and flounced “Fluffy-Ruffles” of last season has met her Waterloo, now that the Empire silhouette , high waist and Directoire styles dominate this season. Not that we will see the end of the bewitching frou-frou of muslin and lingerie’s. It’s fluffiness must be subdued if one is to get the desired slimmer silhouette that Dame Fashion demands this Autumn.

In all ladies underpinnings, supple and clinging materials are in demand, and plaits,wrinkles and folds are taboo. As a result we have the newer ‘combination underwear’.

The most extreme combination is a smooth fitting corset cover, with knickerbockers carefully fitted and with no unnecessary fullness. These are being created in Italian cloths, silks, satin’s and Nainsook and other materials of a clinging disposition.

A novel design in bloomers this season is the Sheathbocker, combining the brassiere close fitting ‘corset cover’, which is boned over the bust and in the front, and the Knickerbocker which is circular, and fits a lady’s smoothly with a slight blousing at the knee. Below the knee, the garment has an elastic band finished on the side with bows – very pretty!

Nightgowns – this season are simply lovely. Here the Empire effect is obvious in the short waist line rather than falling straight from the shoulders or from the yoke.

Though many nightgowns are exquisitely elaborated with delicate embroidery, fine tucking and insert lace, there is an absence in frills.

In Negligees, we see various fabrics, French Nainsook, marzilia, fine lawns and linens, and pretty embroideries, all following a new slimmer line, so that the new silhouettes in dresses – with their close, narrow shoulders, may be more snugly fitted!
These are interesting times for women and it remains to be seen how far a departure Dame Fashion is prepared to make in the coming decade!

Thank-you again to Lori Knowles for her fabulous collection of Edwardian lingerie and to her husband Matt for his permission to re-publish his charming photos. Check out their site and contact them if you are interested in modelling Edwardian fashion.