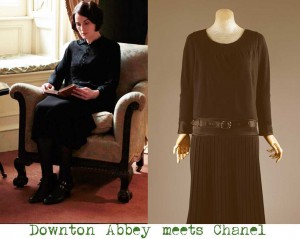 With potential bright young things like Lady Edith and Lady Rose MacClare , the fourth season of Downton Abbey promises to shake off the shackles of misery that left everyone bereft from the Christmas special and hit the Roaring Twenties in style. London in the 1920s had numerous infamous jazz clubs such as the Kit Kat Club, The Coconut Grove, Murrays Jazz club and the Bag of Nails Club, in the basement of 9 Kingly Street. Whether these clubs will actually pop up in person in the series, remains to be seen, but remember its 1922, the era of Evelyn Waughs ‘Vile Bodies’, and there’s even a whisper of Lady Edith heading off to the Cabaret scene of 1920s’ Berlin.

She glows in the first episode in a dishy halter dress, which admittedly doesn’t really come in to fashion until the early 1930s, but here’s a comparison to a Vogue photo from 1923. a stunning bias halter gown by Vionnet. Lady Edith is ahead of the times! Downton Abbey also features the series first  African-American character – jazz singer Jack Carr, who sweeps Lady Rose off her feet.
And not to be outdone by Edith or the young Rose, Lady Mary positively glows in mourning blacks. Her day costume is a very Chanel looking dress.!

The Roaring Twenties in perspective. 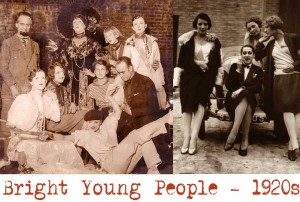 In the years following the carnage of the First World War, on both sides of the Atlantic, the idle rich embraced the hedonistic nightlife of the 1920s.  Many men were scarred survivors of the war, and the women would have all been affected too, having either served as army nurses, or lost husbands or fiances too. 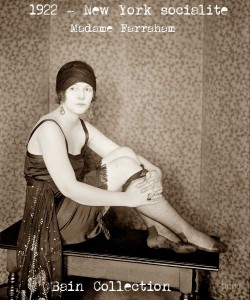 The Bright Young People, was a nickname conjured up by the tabloid press, to describe these partying aristocrats and wealthy socialites. Several notable artists and writers, were included in this group such as Evelyn Waugh, author of Vile Bodies [ the inspiration for Cabaret ] and Brideshead Revisited, and John Betjeman and Cecil Beaton 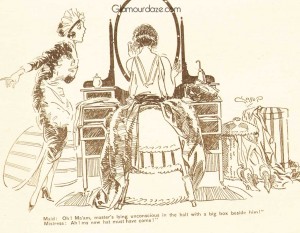