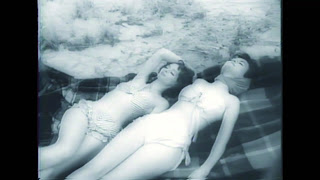 Just to augment our earlier post on Vintage swimwear – Be a retro bathing beauty, we present an interesting
archive film from the 1950s displaying the new daring 1950’s bikini styles of the era. Corseted swimwear was all the rage in this decade which helped women achieve an hourglass figure – the dream look for the 1950s. Boned support in the bra section with special tummy flatterer panels. The result was a very pretty silhouette, even for someone who had unfortunate bulges – as all real women have !

The apron cut from the 1940’s remained the swimwear of choice, but moved further up the thigh, very feminine, though still modest by today’s standards.

The one piece swimsuit is no less popular today than it was in the 1950s, feminine, but not revealing too much.
The apron cut was the normal look, but the bust now had removable straps – a Claire Mc Cardell innovation – so girls could get a full tan on their shoulders. This helped when slipping on that evening frock – no unsightly strap lines ! Two piece suits, which designers like Claire McCardell helped popularize, were becoming more fashionable, but still not very common. The belly button was always hidden, either way.

Play suits and play dresses were always present in that 1950’s beach bag, which were nothing more than colorful long shirt like cardigans, which were short enough to keep the legs exposed.

Jantzen was still the leading name in the 1950s when you were shopping for swimwear, and was once again a household name in women’s fashion magazines following Elizabeth Taylor’s stunning appearance in A Place n the Sun, in which she wore that famous coral white swimsuit. Here she is in a publicity shot from the film wearing a white pique beach dress over a coral Jantzen swimsuit.