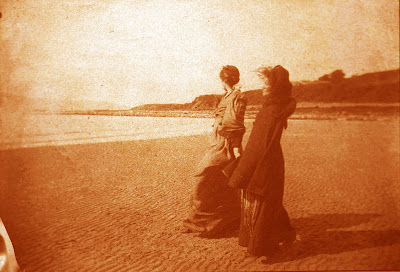 Photo of Margaret and Francis taken by Charles Mackintosh 1894

These two remarkable sisters were highly regarded artists of their day and were the bright young things of their time ! Margaret was married to the famous Charles Rennie Mackintosh, a member of the Glasgow ‘ Immortals’ in the late 19th century, and her decorative style of artwork along with her sisters Francis influenced Mackintosh and also one other particular artist called Gustav Klimt. It could be argued that they helped pave the way for the later Art Deco styles. But it was a mans world then, and their names are mere footnotes in the history of Art. The Sleeping Princess [ below] was published in the famous Redbook in 1895. It has Klimts style all over it, except that Klimt had not painted anything in this style yet.

Margaret was described as a woman who was totally original in looks and style. She had no poses, great masses of coppery burnished hair, above a broad brow and quiet eyes. Francis went on to marry Herbert McNair, another of the Immortals, and subsequently her work was overshadowed by her husbands. Bizarrely  after Francis died, McNair burned all of her work, so very little survives of her. On the other hand Charles Mactintosh remained a true devotee of his wife Margaret and cited her as a major influence on his life and work. They were both cremated, so there are no graves to visit.
That’s all !
©Glamourdaze 2010
Sources – Part Seen- Part Imagined – by Timothy Neat