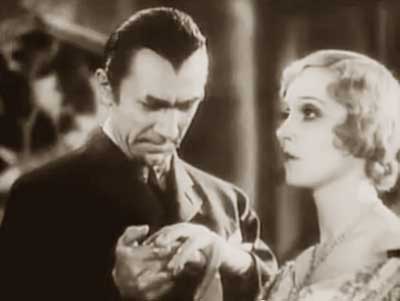 Our friend Talia Felix – curator of the fabulous but sadly departed Gibson Girl Glamour blog kindly offered to recreate this classic early Hollywood makeup look of actress Madge Bellamy’s ‘zombie girl’ look. Even if Halloween is over, I think this look would stop anyone in the street for a second glance.
Over to you Talia!

” During the Halloween season, I was frequently dazzled by the looks of the actresses in classic horror flicks. Many of The Big Ones came out of the early 1930s — Dracula, Frankenstein, The Mummy. One lesser known but important film from this era is White Zombie, starring Bela Lugosi and Madge Bellamy. It’s the first known “zombie movie” (although its zombies stick close to Haitian Voodoo traditions of being victims of mind-control, rather than rotting corpses reanimated.)

In the film, poor Madge Bellamy falls victim to Lugosi’s bokor ( voodoo priest) , and she becomes a zombie on her wedding night. The plot and storytelling are pretty average old-monster-movie, but Madge’s makeup look was keeping my attention all the while.
While the film is 1930s, Madge got her start in the silent era of the 1920s, and is sticking more or less to her old look. Her eyebrows are plucked quite thin, but not pencil-thin like the later 1930s fashion, and her eyeshadow circles the whole eye in the 1920s style. She also maintains the Kewpie-doll lips of the 1920s.
How do we get this modern version?
The look again, though on totally different bone structure.
TO GET THE LOOK:

The typical 1920s eyebrow is relatively natural in actual shape and though thin, it is not pencil-thin. Pluck/trim brows so that they are neat, straight and no thicker than about 1/4 inch at any point (it’s okay if your brows naturally go more narrow.)

Paint on your foundation, covering any imperfections. A film actress might have covered all her exposed skin from forehead to breasts, but for everyday just applying to the face and blending well should do. You may wish to apply the foundation over your lips as well (see step 7.)

Using your brow color, fill in the natural eyebrows, and then extend them out in an arch. The line should curve in a more or less natural way to be level with the outer corner of your eye.
1: the length of the eyebrow 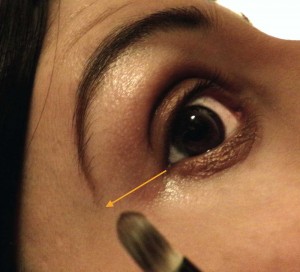 The eyeshadow should cover the entire upper eyelid and extend upward into the crease, and also be applied along the lower lid (using a small brush makes this easier.) Aim for roundness — do not apply color around the corners of your eye. Blend the colors out but keep the outer corners of the eyes relatively bare (adding makeup here will make an almond-shape instead of a circular shape unless you naturally have very round eyes.) Note that a cream shadow is more historically correct, but you can get the same effect with a powder by applying with a brush. and blending well. You can optionally add a flesh-tone shadow over the browbone, but bare flesh serves just as well.
[Step 4.5: I personally like to apply face powder as a final step, but many people might prefer to apply it now to avoid mess.]

Apply white eyeliner to the waterline of your lower lid, trying to get a nice heavy coat on. Apply a smooth, thin line of black liquid eyeliner to your upper eyelid only. Again, aim for roundness — DO NOT EXTEND OUT INTO A ‘CAT EYE’ but rather stop the line at the edge of your eyelid. Go back and build up the line at the middle portion of the eye to enhance the round effect. On the lower lid, using the black pencil liner, line the inner corner of the eye going to about 3/4 of the way across the eye. Blend the color out into the shadow.

Apply mascara to the upper and lower eyelashes, with special care being taken to add length to the lower ones. A primer + mascara is best, if you have it. Use a lash comb if needed, to work out any lumps.
2: the finished eye makeup.

Madge uses a 1920s kewpie-doll style for her lip shape. This look works by de-emphasizing the outer corners of the lips and focusing on the inner portion, though you do need to put some lipstick on the outlying areas to keep the mouth connected. The effect should be lips that are pinched into a “bee-stung” pout about the same width as your nose.
It so happens that my own natural lips are about the same width as my nose already, so I cannot use this trick to de-emphasize them attractively (you NEVER want your lips smaller than your nose when doing kewpie lipstick, it creates a serious “old hag” effect.) I’m showing a demo picture with lips outlined in black, to indicate how to apply the lipstick for a kewpie-doll look, but I am going to actually just apply my lipstick over the whole surface of my lips for my final face.
Using a lip brush makes painting in the lips an easier task.
3: painted mouth.

If you didn’t choose to apply powder before, do it now. Some people don’t like to apply powder last because it gets messy if it’s carelessly applied (ultimately covering the eye mascara or lipstick and thus requiring touch-ups) but I personally just use a light application with a small brush, carefully applied, and rarely have troubles for it. I prefer to do it last because spot-retouching any other makeup errors over a face that’s already powdered can be difficult.

Using manufacturer’s instructions, apply your false eyelashes to the upper eyelid. You may need to retouch the liquid eyeliner after doing this.
It’s notable that Madge might have been using false lashes on her lower eyelid as well, but I can’t tell for sure and I don’t often see false lashes that short for sale. It may just be beaded mascara she used to create the effect, but if you want, you can add a shorter set of lashes to your lower eyelids too.
The final look is this:
4: color version of the face.
Minus the white liner and false lashes, I’ve actually worn this as an ‘everyday’ makeup look with success. Of course, adapt it to your own coloring — unless you’re just going to be filmed in black and white.”
Download Vintage makeup Guides from the classic eras of the 1920s to the 1950s.