Perhaps you have been doing it for years – perhaps it is a new thought. But don’t you find that animated fashion tips from the screen put a new zest into your shopping routine?
There is something about seeing a costume in action that dramatizes the details. You want so badly to wear that frock, try on that hat, slip in to those pretty shoes, adapt them to your own use, make the look your own.
And here’s the way I want you to use this July’s selections here ! 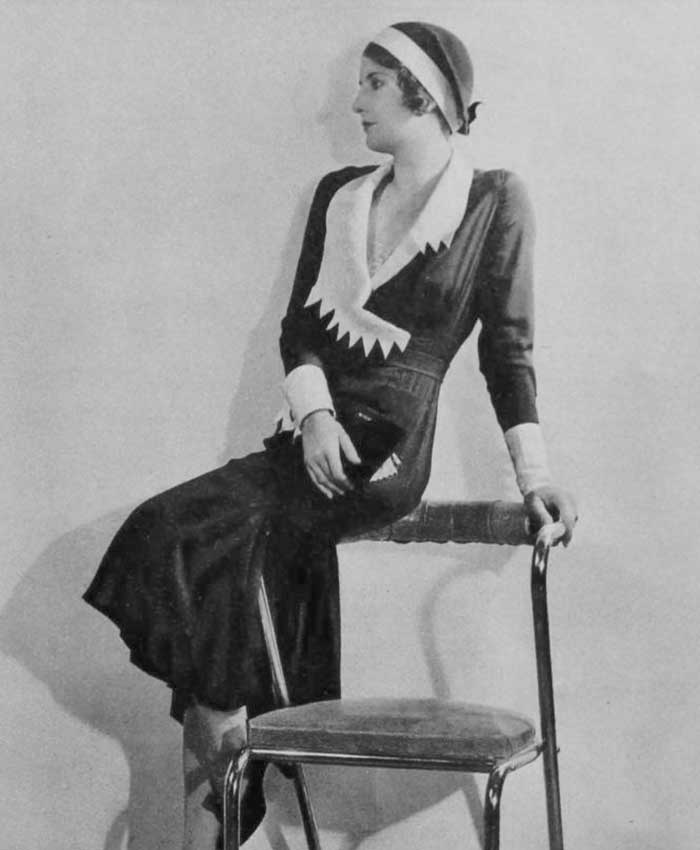 This silk frock worn by Barbara Stanwyck will travel well. It is brown with those cool touches of white that everyone likes this summer. Don’t wear those buckles on your shoes for travelling, however. Barbara wears this frock in Ten cents a Dance.

You can save space in that weekend bag like this one of Francis Dee’s. She wears it in An American Tragedy. White jersey, striped in blue, forms the top and trousers. Remove the trousers and there are silk shorts ready for the plunge! Clever. I like the floppy beach hat too.

Left: When you see Joan Crawford wear this smart outfit in This Modern Age, you will want to go home and try striped accents on your new white dress. There’s a trick to that scarf, if you look closely. A piece of the stripe is sewed to the belt so that tucking the scarf under doesn’t spoil the line. White gloves, white bag and perforated white oxfords are perfect.
Right: Color contrast – everyone is doing it. And none more strikingly than Rose Hobart who wears this frock in We Three. The dark top is navy blue to contrast with a pale pink skirt. Clever buttoning, don’t you think? I like the large natural leghorn with its shallow crown and blue ribbon trim.

Left: You don’t have to be as darkly witching as Fay Wray to wear this evening gown. It is the simple type of frock that’s generally becoming. Graceful crepe romain in a pale flesh tone. Notice how the jeweled bracelet and earrings emphasize the jeweled touches on the frock.
Center: If you are young, slim and delightfully feminine like Anita Louise, I would say your best party frock should look like this. She wears this pale green, silk dotted net confection in Everythings Rosie. Ankle length for the skirt, however.
Right: How a frock can change your personality! Yes, it’s Fay Wray again, but this time quaintly ruffled. I vote this charming – because it is organdy, and cotton is a first fashion, because its short sleeves make it perfect for afternoon or evening – and because it is feminine but not fussy.