George Martin on the creation of an iconic photo – 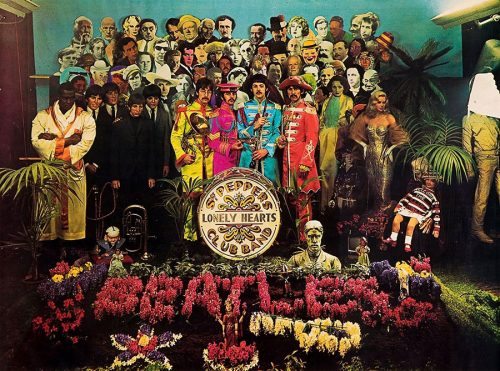 “I suddenly realized with all those Sergeant Pepper moustaches where all that came from. I had an accident on a moped and bust my lip quite badly …and being always in photo sessions, we always had to do that, it was very embarrassing to have this big fat lip, so I started to grow this moustache to hide it, and then the others sort of said. ” Hey, that’s good,” and so without anyone knowing we all just grew these moustaches … it wasn’t a ‘look’ at all, it was just a laugh!”
Paul McCartney

It was April 1967 around the time we started work on George Harrison’s Within You Without You, when we also began work on the album cover.
Until Pepper, record album covers were .. to be honest, rather boring. It used to make me angry when record companies would represent good products so badly. In my opinion, and the four Beatles, the cover should be as significant as the work it contained. It was the first thing people saw when they lifted the album in the record shop, and it formed their first impressions.

Paul, who really had kick started the Pepper theme, had very clear ideas on what a record cover should be.
“On Pepper, we thought, we need an overall concept, packed with little things, so that three months from now you’ll go, ‘Oh, I never saw that ..’ The whole idea was to put everything, the whole album in to this sleeve, and that’s why we got Peter Blake!”

The idea was that the Sgt Pepper cover, like the music inside it, should blow peoples minds, and it did. It was like a shaft of sunlight penetrating an old mine. It caught the excitability, the rainbow colors of the music and it grew a cult following all of its own.
The story began with Robert Fraser, the West End gallery owner, who was a friend of Paul’s, when he was shown an early idea for the cover by Beatle proteges Marijke Koger and Simon Postuma, otherwise know as The Fool.
Fraser didn’t think it worked and he showed it to Peter Blake and Jann Haworth. Blake, a founder member of the British pop art scene, reckoned he could do better.
” It should be a collage!” declared Blake. His wife and respected artist Jann Haworth, pitched in with her ‘cloth figure tableaux’ ideas.

They both spent an evening with Paul in his home listening to rough tracks from the album. They already knew each other as it happens. You might have expected Blake, being an artist, to want to paint something for the Pepper cover, but he didn’t. When he came on board, the Beatles had already had the ‘Northern brass band’ uniforms made, a fair bit of the recordings were complete, and the loose concept of Sgt Pepper was in place. What Peter picked up on was the idea of the Beatles stepping outside of themselves. He suggested borrowing the infamous waxwork figures of the Beatles from Madame Tussaud’s, the idea being that if the people in the brightly colored uniforms were in fact Sgt Peppers Lonely Hearts Club Band, then why couldn’t the Beatles be there, separately, looking on.

Paul already had suggested that the Beatles be in some sort of park, with a huge floral clock and a host of imaginary figures, the audience, looking on. This crowd could be magical. John, George and and Paul gave Peter a list of characters they wanted to see, and Peter, Robert and Jann added their own too, just for the heck of it.

John suggested Jesus and, being John .. Adolf Hitler, just to be naughty. Ringo just said ‘ you guys carry on’ and didn’t submit anything. They didn’t ask me for my heroes, otherwise I would have had J.S Bach and RF Mitchell, (who designed the Spitfire!) added to the tableau.

Jann Haworth suggested civic flower lettering as often seen in Britain’s parks, to spell out the lettering. ‘The letters and words can spell out the whole gig in the park idea,’ she said.
Of course this was mistakenly taken to mean flowers at a grave by many conspiracy nuts.
Blake and Haworth built what was essentially a form of sculpture with cut-outs, plants, props and wax figures.
Jann spent a long time creating the backdrop against which the Beatles would be photographed, hanging the first row of photographs on the studio wall, then fixing the other blow-ups on poles and spacing them in tiers at intervals of a foot, to give the illusion of depth.

It was Peter who created the figures of Diana Dors and Sonny Liston. The Beatles paid Robert Fraser £1500 to run the whole operation. He in turn sub-contracted the work to Blake and Haworth, paying them just £200 between them

Blake asked a fairground artist called Joe Ephgrave to paint a couple of drum skins in a suitably circus style. Ephgrave, unaided, did a brilliantly imaginative job, that has inspired many imitations. His drum skin design ended up in John Lennon’s New York apartment.

There is a bust of T.E Lawrence, buried in the midst of the infamous ‘marijuana plants.’
In fact these spiky green villains which caused so much controversy, widely thought to be cannabis plants were in fact radiator plants known by their Latin name as ‘Peperomia’ ( a little known secret joke). All the foliage in fact came from one of London’s most prestigious garden centers, Clifton Nurseries, in Maida Vale, London. It is unlikely they would have been in the business of supplying weed.
The boy who delivered the plants was a big Beatle fan and contributed his own creation to the cover – a guitar made from hyacinths.

One thing the Beatles gave little thought to was copyright. The head of EMI itself Sir Joseph Lockwood, took one look at the proposed album cover and said, “This is nonsense, we’re not having this.”
The Beatles, well aware of their vast power replied “We will have it.” Finally Sir Joe relented but laid the responsibility on Brian Epsteins shoulders to get all the clearances for using the images, many of who were still living. Brian turned to Wendy Hanson, his resourceful but now ex p.a to complete the Herculean task. It was a nightmare. Late night transatlantic phone calls to Fred Astaire, Marlon Brando, Johnny Weissmuller.
Mae West proved difficult. “What would I be doing in a Lonely Hearts Club?”
Finally it took a personal letter from the Beatles begging her to get her to change her mind.

Sgt Pepper was a long way from the sparseness of the cover of Please Please Me in 1962, which like the album itself ( recorded in a day) was a rush job – shot on the balcony of EMI studios.

Finally the shoot itself took place in the studio of Michael Cooper in the late evening of March 30th 1967, prior to a late night recording session in Abbey Road studios. The Beatles arrived in the late afternoon and donned their famous Pepper suits, which they had designed for them by a team at MBA Costumes.
The photography and lighting team included assistants Andy Boulton, Trevor Sutton and Nigel Hartnup who took the actual photograph.

Text©George Martin
Taken from his book Summer of Love