The Nylon hosiery sensation of 1940

The story of how Nylon stockings shook the fashion world. Who created Nylons and the seismic impact they had on women.

Up to 1940, the most a woman could expect of a three threaded silk stocking was about 150 hours of wear. A glamorous two-thread stocking might, with luck, hold out for 100 hours of use.

These days, stockings are experiencing a re-surge of interest from women, as vintage inspired fashions become increasingly popular.

What Katie Did is our recommended brand of vintage inspired seamed stockings in a variety of colors.

Developed by DuPont inventor Wallace Carothers and his team in 1935 the official name was Polymer 66.
Starting from scratch, DuPont saw the commercial viability of trying to devise a method of stocking creation. This meant extruding the fiber, winding it on bobbins, putting a finish on it, knitting it into stockings on machines made to knit silk.

The idea entailed placing the newly knit stockings on shaped forms and steaming them, which created the sheer finish.

One early question was what to call the new fiber.

It simply didn’t role off the tongue !

Origin of the name Nylon

It was first called No-Run. Unfortunately, the early stockings tended to have a lot of runs. So that name had to be abandoned.

A little clever word play finally produced the meaningless name of NYLON. Simply because it sounded good and everyone liked it at DuPont.

In 1937 DuPont hired the Union Manufacturing Company to secretly manufacture the first Nylon stockings that same year. As the scientists had yet to figure out how to make flesh tones from Polymer 66, these early stockings, with a cotton seam and silk welt and toe were black.

Rumors quickly spread that DuPont had developed something revolutionary and that hosiery was top of the list as a potential product.

The first public announcement of Nylon was on October 27th 1938 at a preview of the coming years New York Worlds Fair. The New York Herald Tribune ran DuPonts first advert on October 30th – interestingly on the same day of Orson Welles infamous radio broadcast of War of the Worlds.

First a low key public demonstration at the Golden Gate Exposition in San Francisco on February 18th 1939. DuPont went all out at the New York Worlds Fair in April, touting Nylon as a new wonder synthetic fiber made of “carbon, water and air.” The Nylon stockings show caused a sensation!

Nylon stockings first went on public sale later that year. On October 24th to be exact. Six selected stores in Wilmington, Delaware, the head quarters of Du Pont, where inventor Wallace Hume Carothers and his team had developed the new super polymer.

Wallace did not live to see the phenomenal success of Nylon. he died two years earlier.

Women had traveled from as far as Washington DC to storm the Delaware stores, so as to be among the first to buy these new wonder stockings.

They found hosiery that was sheerer than silk and infinitely more satisfying to wear. There were some detractors. One lady who had quickly snapped her new pair, returned them. She claimed that someone had put too much ‘air’ in them.

But the Wilmington experiment proved women were ready and eager to accept Nylon hosiery. Stocking manufacturers began quantity production, offering 4,000,000 pairs for sale throughout the US on May 15th 1940, known hitherto as Nylon Day.

In New York, 72,000 pairs sold in the first day. The nation’s supply of most wanted sizes was exhausted in four days. Women were jubilant at the thought of cutting their $400,000,000 annual silk stocking bill in half or less.

According to Fortune magazine in 1940, American women were divided into two camps. One small violently anti-nylon on one side and a larger, enthusiastic pro-nylon group on the other side.

To determine for themselves the durability of Nylon, Life Magazine asked the United States Testing Co to test four popular types. Nylon out-wore on every test !

Nylon Stockings are Rationed for WW2

There was a rush for Nylons before stocks ran out, that has gone down in history. In Denver alone, women bought $125,000 worth of stockings in just two days.

By 1942, Nylon stockings were in extremely short supply and remained rationed until 1945.

American servicemen arriving in Britain in 1944, had filled their kit bags copiously with Nylon hosiery, provided by the US army.
Many an English girls heart was won over as a result.

In August 1945, DuPont announced that hosiery yarns were up and running again. This was just one week after the war ended.

The surplus of Nylon meant there would be 36,000,000 pairs of nylon stockings per year. The equivalent of 11 pairs for every American woman. ” Nylons by Christmas!” became the motto of the country !

When the first Nylon stockings finally hit the stores early in December 1945, the reaction was riotous. The headlines in Chicago trumpeted “Peace is here ! Nylons on sale!” The New York Times reported “30,000 women join in rush for Nylons!” and “Nylon Mob, 40,000 Strong, Shrieks and Sways for Mile.” 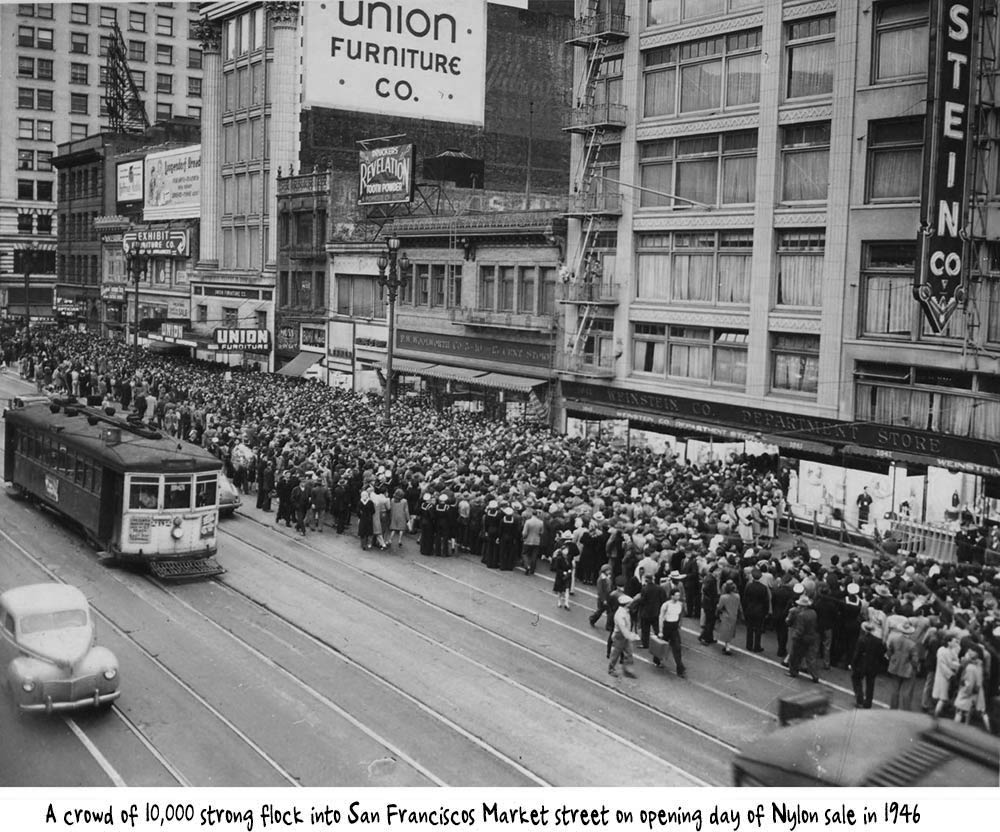 In San Francisco, the first sale drew a massive 10,000 into Market Street. They had to close the sale early when one of the display windows caved in from the force of the crowds.

Pretty Polly created an iconic TV advert in 1988. For the first time, a generation of women knew who they could thank. Wallace Carothers.

Shop for vintage Nylons and Shapewear.