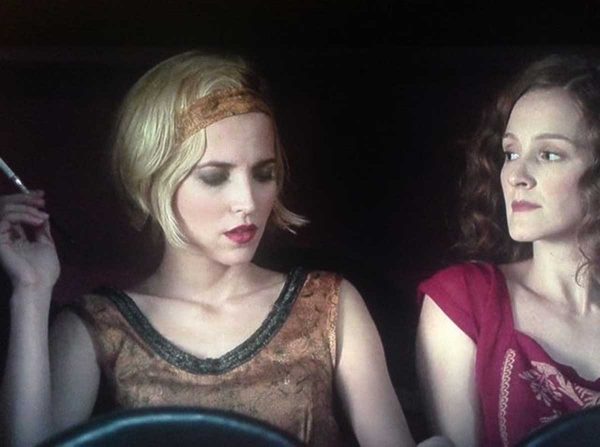 Drawing some inspiration from recent films like The Changeling and the 2013 film adaptation of The Great Gatsby, there is a feeling of the story having a present day relevance thanks to a modern music soundtrack. It has a distinctly feminine edge.

We’ve included some stills of Cable girls for you to drool over the beautiful 1920’s dresses , hairstyles and cloche hats. The costume design is by Helena Sanchís, and she is clearly a fan of color, if the cast’s frocks are anything to go by.

That being said, a few 1920’s ditties by Louis Armstrong would not go amiss. Set in 1928, could we not have at least one play of my darling Annette Hanshaw‘s “I can’t give you anything but love?”

A regular highlight is the eye catching opening graphics of Cable Girls and haunting theme song Salt by Brenna Miles.

The story interweaves the lives of four young women of very different backgrounds who all work together as Cable operators at a large telephone company. A powerful sisterhood gradually develops between them, and they each go to great lengths to help each other out of their various predicaments.

There’s plenty of romance in the story ( they’re young after all) , and though it’s a bit soapy at times, you will get hooked by the sheer charm of all the characters.  The cute flapper costumes are a pleasure to behold, fitting snugly on wafer thin bodies.

Nowhere near the accurate body dimensions of most women of that era of course, but this is show business ! The lipstick is perhaps a little too 1940s for the time. Certainly the wearing of red was confined to evenings, but I’m not going to nick pick.

Who are the Cable Girls?

The four main protagonists are Alba, girl with the shady past, played demurely by Blanca Suárez . Carlota, the rich kid running away from her oppressive father, played by Ana Fernández. She is my favorite character and the most relevant. The confident Ángeles Vidal (Maggie Civantos), who has to cope with an alpha male abusive husband. The mousy but quickly maturing Marga (Nadia de Santiago).

A sobering report by the UN that 1 in 3 women still experience sexual violence, puts a little context to this story that some things have not changed very much in the past 90 years.

While the story’s premise is about the women, the brotherhood of Carlos (Martiño Rivas) and Francisco (Yon González) is a surprising and welcome addition to the story. Namely Carlota’s love interest, the feminist Sara, played by Ana Polvorosa who adds some spice to the drama.

Cable Girls is the first Netflix outing for director Carlos Sedes and producers Teresa Fernandez and Ramon Campos, following on from their recent success Gran Hotel. At episode 8, so far so good, with another 8 episodes to conclude season one on the way hopefully. Glamour Daze wishes Las Chicas del Cable the best !