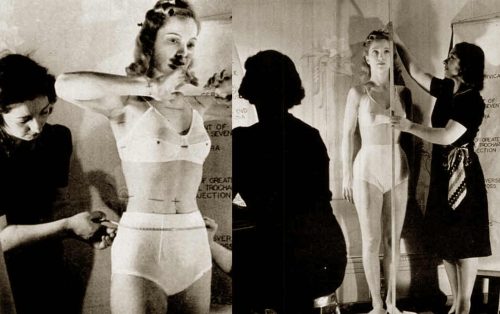 Before the 20th century, clothing was made in the home or by professional tailors and seamstresses.  Whether clothing was made professionally or not, its size was determined by the size of the wearer.  There was no such thing as a size 6 or a size 18.  Your clothes simply fit your body measurements.  There were no such things as size tags.  So there was no dress sizing per se.

As the industrial age progressed into the 1920s, increased demand for clothing gave rise to ready-to-wear or off-the-rack clothing.  However there were no standard clothing sizes, so clothing sizes would vary widely between manufacturers.  As a result, ready-to-wear clothes gained the reputation of fitting rather poorly.

Early dress sizing may have taken its first cue from the sewing pattern industry.  In the early days of the pattern industry in the 19th century, patterns were based on bust size.  If your bust measured 34 inches, you purchased a size 34 pattern.  Waist and hip measurements were not given because these were believed to be easily adjustable by the home seamstress.  Also note that these were the days when corsets were typically worn under clothing and a corset could be adjusted to control a flabby waist or too-large hip.

By the 1930s and 1940s, corsets had gone out of fashion, but patterns were still sized by bust and hip, not waist.  It was believed that the waist was the easiest point on the pattern to adjust, so it was not listed in the sizing until the late 1940s.

At this point, a 1940s woman with a 36” bust would wear a size 18 – this number represented half of her bust measurement because the sewing pattern only provided tissue for half of the garment (the seamstress cut two halves from the same pattern).

In the 1980s, a phenomenon called “Vanity Sizing” was noted.  This is the practice of reducing the size number of a dress size in order to please the customer’s desire to be perceived as smaller than she is.  For example, according to Sears’s 1937 catalog, a woman with a 32 inch bust would have worn a size 14 dress.

So while a size 10 is definitely larger than a size 2, the numbering is now quite arbitrary.  It no longer refers to any body measurement at all.  Dress sizes are completely meaningless today.  And they vary by country too.

Reconstructing History solves that problem.  We label our sewing patterns with lettered sizes, not numbers.  So in our patterns, you will be a C or a G or even a K.

No judgement calls.  No confusing numbers.  Just eleven sizes in every pattern.

That’s all !
©Kass McGann for Glamourdaze.com