One in wartime Britain, the other in pre-war America 1941 – 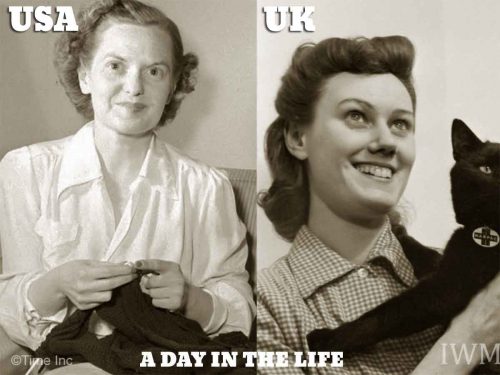 In late 1941 – quite coincidentally, there were two picture essays of a typical day in the lives of two different women in the 1940s.
The first, an American housewife, by the name of Jane Amberg from Kankakee, Illinois.USA.
The second, a young British girl called Mrs Olive Day, in bombed out London. She is newly married and her husband Lieutenant Kenneth Day is away on war duty.

London – Olive Day wakes at 7am at her home in Drayton Gardens, South Kensington. Olive sleeps with her gas mask, torch and a book handy, in the event of having to make a quick dash to the air raid shelter during the night.

Illinois – Jane Amberg, mother of three, starts her day early at 6.30.The only time they get to themselves, Jane and her husband John breakfast alone.

London – Before going to work, Olive makes her bed, cleans out her fireplace – carefully separating cinders from ash. ( the cinders are re-used and the ash is used for fertilizer in her garden) .

Olive cleans her landing,pointing out a hole in the ceiling made recently by a fire bomb which came through during a bombing raid.

Illinois – Jane drives her husband to work, her kids to school and by mid morning is home making four beds and tidying her living room.

Today is sewing day with her friends, so she heads over for coffee and an hour of fun and gossip.

London – Olive makes it to the tram just in time for work. She works as a ‘girl clerk in a war-time organisation’ ( no further information is supplied by the war office and that most of her day is filled by filing .

Illinois – Jane is back by noon to fix up lunch. She collects both kids and husband at 1pm. She calls herself a “short order cook”. Later Jane does the washing and prepares the evening meal.

London – After work Mrs Day collects her meat ration from her local butcher.

Once home she prepares and puts her dinner into the oven after a busy day.

While her evening meal is cooking, Olive settles down on her bed with the evening paper and a spot of sewing.

Illinois – Jane collects her kids from school and takes them shopping.

She cooks the evening meal and sets the table for John and kids. After dinner, she bathes the children and puts them to bed.

Tonight Jane must fill the role of her husbands glamour girl at a business dinner and dance.

Her make-up is set out on her table. Then it’s off to the dance. Though she’s tired, it’s always nice to get dressed up.

London – Olive makes up a bunk in the air raid shelter in the cellar of her South Kensington home. Always good to be ready for a bombing raid after that near miss through her ceiling.