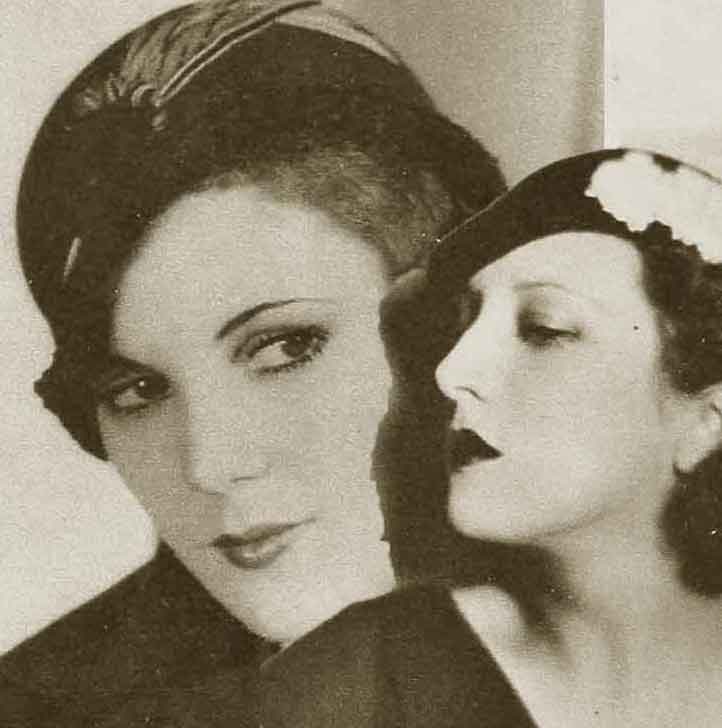 We asked actresses Marian Marsh, Loretta Young, Ruth Hall and Estelle Taylor and Karen Morley to model what the fashionable young woman will be wearing to college this winter.
The girls went to Manhattan to select their favourite outfits to stroll Park Avenue in.

Loretta Young models a fur coat that is oh so young ! Not only Loretta, but every 22 year old loves a coat like this. It’s of barunduki combined with a dull red tweed. The belt is very smart.
Next is Marian Marsh, who steps out in a reversible coat of sheared muskrat and soft bright green cheviot wool. There’s a wide green suède belt with swagger clasp. Of course it has a waistline – all good little fur coats have, this season.
Karen Morley’s suit of mixed black and white tweed is trimmed with black and white astrakhan. Its line is so figure hugging, helping you both to feel womanly and cosy against the winter elements.

Estelle Taylor wearing one of the ‘new hats’ by milliner Russell Ball.
But not one of the exaggerated models which have already had their day and fallen into discard.
Ruth Hall is most fetching in her Fryer hat. The chenille brim lifts it right out of the commonplace. The featered cockade is a bright note on the brown felt.

To the left – Marian Marsh steps out in a day-time costume high-lighted by an informal fur coat, hip-length, of flat chocolate-brown kid with a scarf tying at the throat! Note Marian’s gloves with the wide cuffs.
To the right – the pyjamas are here to stay. Look at Marian Marsh in this simple black velvet pyjama costume, with cape sleeves and very wide trousers. Pyjamas are the debs’s delight !

Now – off to the piste for the weekend. Loretta Young wears a winter sports suit of blue and white. Dark blue trousers with a wide light blue stripe. her scarf is striped too.
To the right Judith Wood‘s new brown and tan wool outfit is so fetching. Judith chose her gloves, socks, and beret ina matching shade of tan. Note she has that beret tilted at exactly the right angle.

You can’t imagine a more dramatic effect for evening than “ice-white above black.” The exposed back is also in again this season. Marian Marsh’s black-and-white gown is deeply decolletè in the back, with moulded figure lines.
To the right, a stunning dress of luscious black velvet, paired with new shirrr-and-puff gloves of glacè kid.