Vintage Nostalgia Show is a unique summer vintage festival in the heart of the UK’s Wiltshire countryside and takes place 29 – 31 May 2015. Now in it’s fourth year, we find vintage cosmetics line Bésame Cosmetics head-lining as official show sponsors for 2015 ! 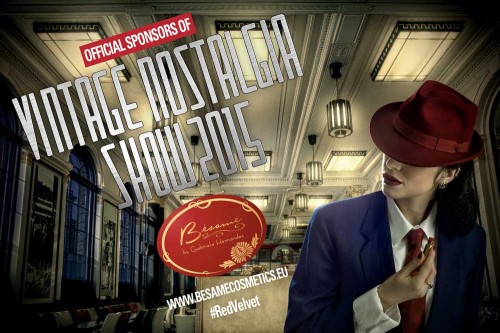 Glamourdaze spoke to Sharon Holloway, Director of Bésame Cosmetics Europe, and owner of vintage hair and makeup specialists Vintage Hair Lounge to find out more about why this new partnership has formed, and also for some inside information on how the new hit US series Agent Carter has propelled Besame lipsticks to the the front page of magazines such as The Gloss and how Bésame’s “Agent Carter” inspired campaign for the show was put together.

Sharon – “We are really excited about Vintage Nostalgia Show this year. It is one of our favourite vintage events in the calendar, and Vintage Hair Lounge has been hosting the show hair and makeup salon since this event launched in 2012. Bésame has been a central part of Vintage Hair Lounge ever since it began, and belongs with all our pop-up salons at events we do throughout the year.

“Since taking on the role of European Distributors for Bésame at the end of 2013, Vintage Hair Lounge has continued to develop the profile of Bésame in Europe, with more stockists and a stronger identity, seen in our attendance at shows, links with the film and tv industries, links with high profile performers, and the new Bésame Cosmetics Europe website

We are immensely proud to take responsibility for brand images with our creative team of models and photographers, and the Vintage Nostalgia Show will be a perfect opportunity to bring together all our talent, from our Vintage Hair Lounge hair and makeup team to our wonderful models, for a fun glamorous weekend to start the summer!

GD – So where does Agent Carter fit in to all of this?

Sharon – “It has been the strangest phenomenon, but as soon as the Agent Carter television series premiered in the US in January this year, it was evident that British actress Hayley Atwell’s character Peggy Carter was connecting brilliantly with female audiences. Hayley tweeted that she was wearing Bésame Cosmetics Red Velvet lipstick (1946) – and that has gone crazy, with customers from all over Europe buying the lipstick, even though the series hasn’t aired over here yet.

“So it was an irresistible challenge to pay tribute to the Agent Carter / Red Velvet phenomenon with our own model, Raven Brookes, who has featured regularly as one of our lead faces of Bésame since 2014. We took inspiration from the highly stylized comic book feel of the television series, and combined it with some traditional film noir references, making sure that Raven’s own unique alternative style wasn’t completely lost. Our photographer Scott Chalmers did an amazing job with the lighting and atmosphere of the shoot in the studio, but he also captured the background atmosphere by photographing inside a local ornate restaurant and creating a composite image that conveyed the Agent Carter inspiration, but with our own influences too.

“The show sponsor images were also designed with our graphic designer, Cassie Leedham-Lewis who expertly conveyed the Agent Carter branding.

“We also took the opportunity during the photo-shoot to deconstruct the 1940s Agent Carter look, and stage by stage our stylist Ellen Rey de Castro was able to transform Raven’s look to something much more contemporary. The makeup never changed throughout the shoot, which just goes to show, classic timeless beauty is the essence of Bésame Cosmetics. The Red Velvet lipstick looks amazing to the eye and on camera. Mission accomplished!”

GD – We like to all it Retro -Moderne ! Thanks for the chat Sharon and have a ball at the Vintage Nostalgia Show.

Tickets for the Vintage Nostalgia Show can be purchased at www.vintagenostalgiashow.co.uk

Raven Brookes will be making a personal appearance at Vintage Nostalgia Show on 30 and 31 May.

Find out more about Bésame Cosmetics in Europe at www.besamecosmetics.eu