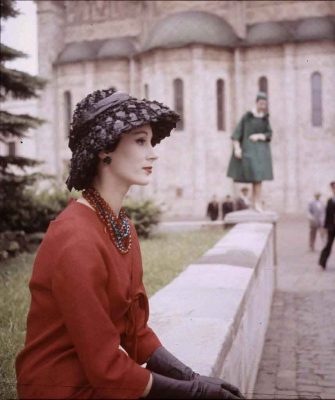 Ordinary citizens of Moscow were greeted to the sight of three young willowy French models from the House of Dior, on a meet and greet event ahead of a five day fashion extravaganza. The girls were spotted wandering through the GUM department store, along Red Square, down through local markets.

Now under a young Yves Saint Laurent, ( Dior had passed away in 1957) the House of Dior had abandoned the corsets and crinolines for loose skirts and shorter more practical kitten heels.

This visit was not the first such event. In 1956 a team of British designers had held a show in Gorky Park.

The decision to court foreign ateliers had been made from on high, and was actively encouraged by the Khruschev administration. The visit however did little to create a Russian fashion revolution. Pravda magazine reported that the styles would not suit Russia’s stout women!

It wasn’t to be until the late 1980’s that fashion would finally come of age in a crumbling Soviet Union.
Still these photographs are delightful to look at.