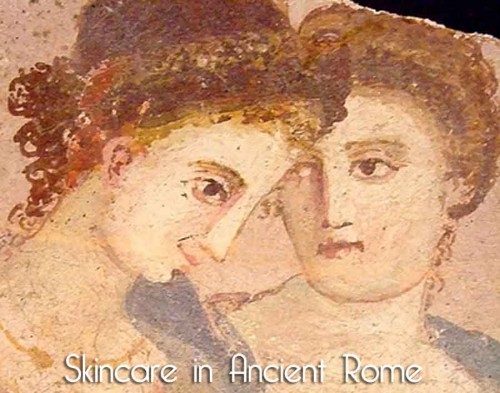 Attention to aging skin has been a priority for over 3000 years. In ancient times, masks were used to cleanse and maintain the skin’s moisture. The Egyptians used anti-wrinkle creams made with essential oil of frankincense, which claimed to possess anti-inflammatory properties.
Thick creams, created to preserve moisture on mature skin, were formulated from resin, wax, oil, grass, and plant juice. A milk bath was believed to keep the skin clear because the lactic acid in the milk had the effect of a peel as it got rid of dead skin cells and revealed a healthy new layer of skin !

Scrubs were widely used during Roman times to refine the skin’s texture. these were fashioned from seeds, orris root, and honey. Face masks made with starch and eggs were believed to tighten the skin and keep it youthful.
Some women used crocodile dung to preserve their complexion !

Skincare Cosmetics in the Middle Ages

Herbs and salves were used to guard the skin against the cold. Soap was used as a medicinal aid rather than as a daily cleanser. Women made white face makeup from wheat. Castile soap was used as fine toilette soap by the wealthy.

Skincare Cosmetics in the Renaissance Era

The 16th and 17th Centuries brought many “cures” for freckles and a flood of miracle face creams. Toners made from oil of bay, rhubarb, spices, and wine were sold by travelling salesmen. lemon juice and eggs were used as a face mask, and egg whites were used as foundation for a taut and shiny complexion.

Skincare Cosmetics in the 18th and 19th Century.

In the 1700’s face tomers and scented waters were popular. Cold cream made with scented oils, spermaceti, and wax, then mixed with rosewater and ambergris, was a common toilette preparation.

Skin peels were all the rage by the late 1800’s – acid peels in particular. Phenol weed, made from carbonic acid was thought to restore softness to skin.

Skincare Cosmetics in the 20th century

But it was the 20th century when face cosmetics entered its golden era and mass production made cosmetics available to women of all classes.

Harriet Hubbard Ayer was one of the first to promote commercial face cream with the help of actress Lillie Langtry. Helena Rubinstein marketed her creams from her own mothers recipes made back in Poland.

The Pond’s company produced a commercially successful vanishing cream with the innovation of oil-in-water emulsion. The product was famous for its smooth, dry feel on the skin and its pearly sheen.

The 1920s brought an increased fascination with youth, popularized by lively flappers, and cosmetic companies were quick to deliver innovative sales pitches – to guarantee a youthful look.

The advent of electricity extended to the cosmetic arts, and by 1930, electrical current with pulsating microwaves was used by salons for facial treatments to tighten and restore the skin. many machines were invented for this purpose, including the Violet Ray machine that advertised it would “increase secretions” and “sooth the nervous system.”

Other salon procedures created to improve the skin included the Elizabeth Arden Youth mask, which consisted of a paper mask with tun foil connected to a box that supplied low levels of microwave energy. This ‘beauty science’ continued to be popular in to the 1940s.

By the 1950s, the “peaches and cream” complexion was the basis of all 1950s skincare trends.

In order to prevail in the skincare market, foundations and pressed powders had to promote a soft, feminine look.

Elizabeth Arden’s Eight Hour Cream contained vitamin E and was one of the first products to use petrolatum, a skin soothing beta-hydroxy.

The 1970s saw “natural ingredients” being incorporated into cosmetics to satisfy the growing need for organic products. Clinique emerged as a brand with an image of scientific authority. Their white make-up counters were attended by white coated employees.

By the 1980’s, collagen and other extracts were used in skin formulas. the first anti-aging skincare products appeared during the late 1980’s.

The 1990’s brought AHA’s ( Alpha Hydroxyl Acids ), the first ingredient to actually affect aging skin. The roles of vitamins A, C, E and group B were discovered to have a special role in premature aging.

By the 2000’s hyraluronic acid moisturisers emerged, and manufacturers began using anti-oxidants, sunscreens, and skin energizing technologies to “recharge”.
The main change in cosmetic skin products has been the switch away from using animal and synthetic derived ingredients to using all or partial natural and organic ingredients.
Hormonal and steroidal creams have been replaced with botanical stem cell extracts.
Today’s woman is constantly looking for new ways to stall the passage of time, and today we have hundreds of choices in the type of treatments and products available. Women look to the near future for the next big thing that holds the promise of eternal youth and beauty !

For a great article on 18th century cosmetics and hairstyles
visit Demode Couture.

1 thought on “A Short History of Skincare Cosmetics”