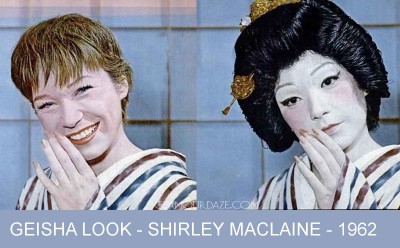 How to keep a man happy in Japan, an ancient and complicated art, and the attractive American star Shirley MacLaine, intently studying a real geisha at her make-up, has come to the source of that art to learn it. 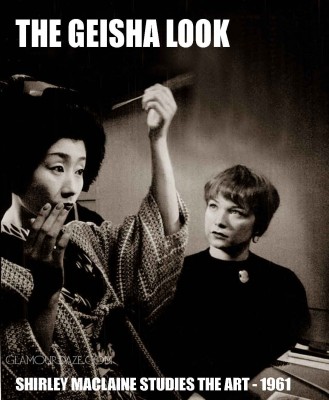 She is studying the geisha look for the part of her next film My Geisha. which she is making with her husband Steve Parker. In it she plays an actress who so convincingly turns herself into a geisha that she fools even her own husband.
So Shirley is in Japan transforming her outward style, inner attitudes and even the color of her eyes ! 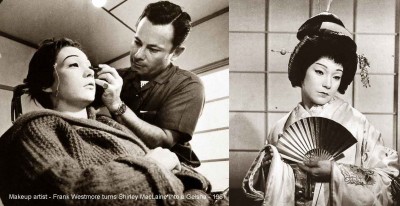 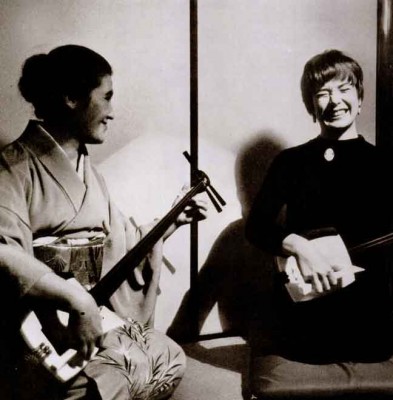 Sitting on her heels, toes tucked in as proper Japanese girls do, was hard for a tall girl. She got the stance but not the notes on her ancient samisen instrument.

Shirley learned from real geisha’s how to slide into a room like a shadow, to walk like a bird. ” In a kimono,” they insisted, ” you must walk from the knees down.” they made her hold her handkerchief between her knees and mince around the room to master the geisha gait !

“Tighten up,” she was told, ” feel all in order and this will put your mind in order.”
The final effect is achieved when the girls fitted her into a 17 piece geisha outfit that turned her into a living doll – Japanese doll that is!

A geisha,” she says, ” is a cultivated woman. She can dance, sing, discourse as an equal – and in several languages, discuss the stock market and politics, make people feel at ease in their presence, and above all be a woman. It wouldn’t be a bad idea if more women tried it !”