Claudette Colbert tells How to be Beautiful in Spite of Your Face ! 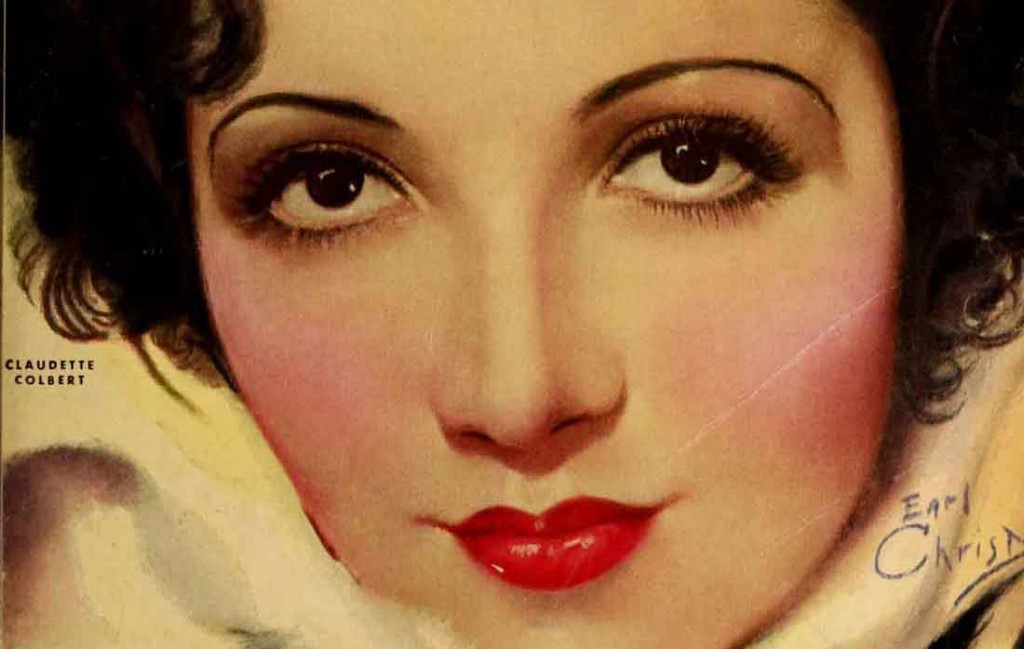 The actress who reputedly insisted that she be filmed on only one side – her pretty side – revealed herself to be a very amusing deprecating woman to Carolyn Van Wycks in 1933 and explained that while ” everything is wrong with my face” how she can create an “illusion of beauty” – through the art of screen makeup and lighting.

Claudette Colbert has acquired a reputation, somewhat to her astonishment, for unusual beauty, with a set of features that she, herself, says simply do not match.

Yet the ecstatic reviews of her recent hit films such as “It Happened One Night” have been, for the most part, on the subject of her beauty. ” Of course hardly ever for my acting!” she laughs ” but that is the lot of every woman – to be judged on her feminine assets of figure and face!”
” This face!” she gasps. ” If only you knew the trouble I have with it and how much work it needs. To have been called beautiful after all these years, is almost too much for me. Everything is wrong with it. But I give most of the credit to great cameramen such as Charles Rosher who have certainly helped cement this illusion amongst my fans” 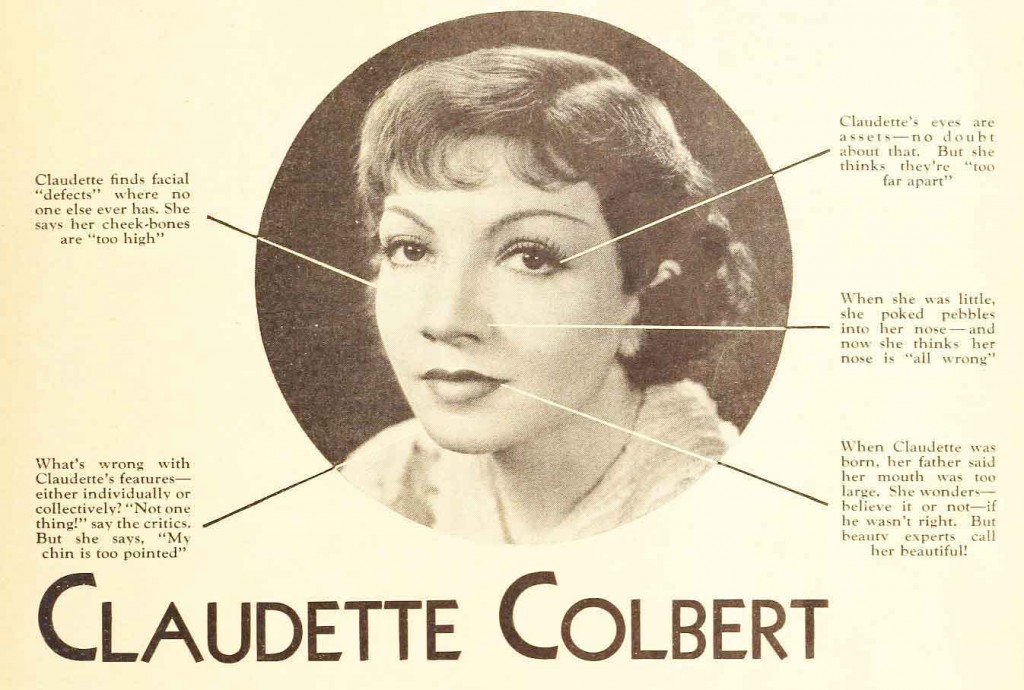 ” To start – I inherited the worst features of both sides of my family. when I was born my father said, ” She looks as if she might have nice eyes – sometimes – but what a terrible oven she has for a mouth!” He was French you see – and his ideal of womanly beauty requires a small mouth. Mine was enormous!”

As a little girl she used to stuff pebbles in her nose. ” My mum would say – why Claudette – don’t you want to be beautiful? No I don’t ! – was my usual naughty reply.” 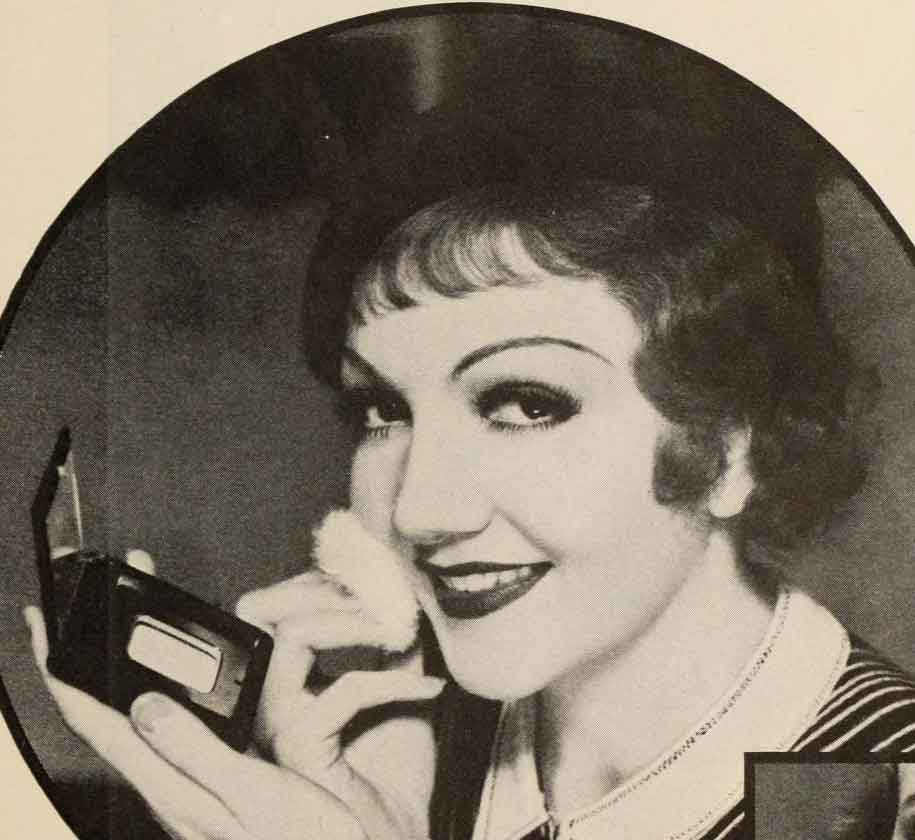 “I found that after I staged acting – that i could achieve lots with lipstick and eye-shadow – but when I appeared in one silent movie – and I saw it – I knew that I was right about pictures! They were not for me. I grew very arty about them – said that pictures were stupid and the stage was the only medium for my great talent. But of course the real reason was of course, my face!”

“When I started in the Talkies, I knew nothing about screen make up, nothing of the subtle technique of the camera, which can create loveliness where it doesn’t exist. i have big wide eyes – so I hardly wear any eye makeup at all. I use lipsticks to contour my “oven mouth” down to a pert version. I emphasise my cheeks and then work with the camera and lighting guys to help create the cinematic illusion. After all my job is not to resemble a cabbage patch. There’s a lot of money at stake” she laughs. 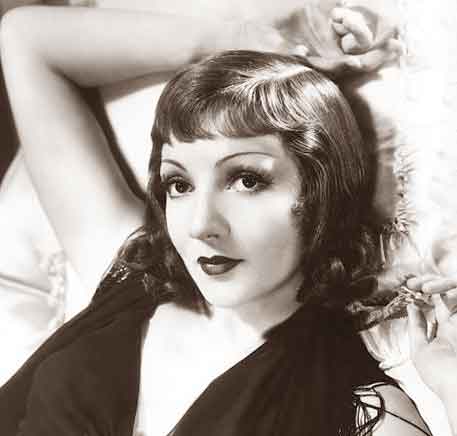 Let me add, just here, that Claudette is really a very lovely thing to see off the screen, as well as on. Her reputation for beauty I feel is justified. The defects in a girls face are the most attractive things about her. So perhaps it is Claudette’s ” defects” that make her so piquant!

“Garbo,” says Claudette ” is not perhaps a beautiful woman in the classical sense. but when she enters a room, with that long slow stride of hers – she gives an illusion – if it is indeed an illusion – of beauty and glamour that has everyone mesmerised. Ruth Chatterton is small and by no means of perfect features – but I defy you to say she is not beautiful. I adore her.

The trick I think is to feel beautiful! ”