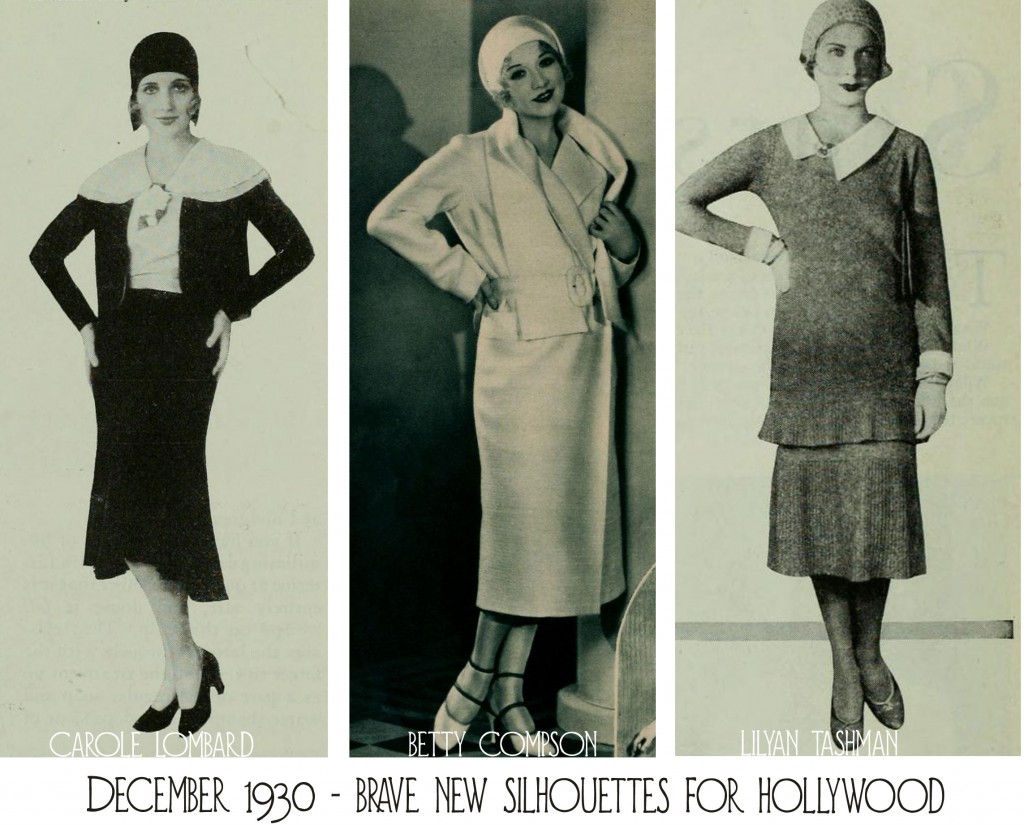 What did Hollywood most glamorous women think of the new longer skirt fashion of 1930 which heralded the beginning of the austere era?
Photoplay Reporter Lois Shirley reports for Glamourdaze and shares the opinions of nine of the outstanding women of the screen – Gloria Swanson, Joan Crawford, Clara Bow, Nancy Carroll, Anita Page, Janet Gaynor, Bessie Love, Bebe Daniels and Norma Shearer.

The high moguls of the fashion world said, “Let there be long skirts,” and lo! there are long skirts.
But what about the women who wear the skirts?
What, above all, about the greatest purveyors of style in the world today – the women of the screen?
Will film stars accept the new hem-line? Do they have a choice?
All nine girls are unanimously in favour of long skirts for evening wear as it happens. The majority like their afternoon frocks long too. But they are divided as regards the lowered hem-line for tailored street frocks and they all are holding our for short skirts for sports wear.

GLORIA SWANSON declares that she favors the long skirts and always has. She was one of the last to discard them when short skirts came in and one of the first to re-don them when short skirts went out. ” I think they are much more graceful and feminine,” she says and she lefts her skirt to reveal a very shapely pair of legs – just to show that there is no ulterior motive for her preference.”I don’t favour the stocking-less vogue either, I adore fashionable hosiery and consider a fine pair of stockings to be an imperative part of my daily wardrobe!”

JOAN CRAWFORD who probably typifies more than anyone else on screen the bare legged, sun tanned flapper says ” I love these new styles, the shapely tight to the legs fit is most pleasant to wear and flattering to my figure” the recent Mrs Fairbanks is wearing stockings for the first time in four years – but only for her street costumes. ” I still prefer the stocking less leg for evenings and as far as I’m concerned they will always be in vogue”

CLARA BOW is surprisingly docile for a young woman who usually ignores the styles of Madame fashion. She says: ” Oh I hate to see short skirts go out of style! Everyone looked so young and carefree, and now we will have to act dignified to live up to these majestic draperies. I have had my street things lengthened just a little and of course my evening gowns have been long for years, so no change there. I hate stockings as a rule but fashion says – as does my studio boss – that i must don them, so I will certainly look for the finest I can find. But I do protest at all of this!!” There’s the old Bow spirit!

ANITA PAGE believes that this new lower hem-line is here to stay. She says – with a little smile that belies her words – that we are “going back to the Victorian era once more” – not only in dress but in morals. “Legs,” says Ruth “at least will become a source of intrigue again. Nothing which is too fully revealed can be beguiling or feminine!”

JANET GAYNOR is somewhat dubious about trailing skirts for daytime wear. “Long skirts are pretty for formal wear” declares Janet, ” but I cannot imagine myself in ankle-length skirts for everyday wear. For evening wear – a long flowing bias cut dress is lovely of course and so feminine, but for everyday wear – I just don’t know. I do like the latest wardrobe of Jean Patou’s though. I think his shapely look could become the new vogue for lower hems. If a skirt is to be long – then let it accentuate a woman’s curves I say!”

BEBE DANIELS sponsors long skirts for afternoon wear but feels that four inches below the knee is an awkward length for any woman to adopt. As for hosiery – ” well I have never gone stocking less and I do not intend to start. Bare legs may be convenient but you can’t beat a pleasant pair of stockings for feeling and looking lady like.” Bebe says that she is having her new sports clothes made as short as ever and has no intention of changing.

NORMA SHEARER , famous for her stunning wardrobe is enthusiastic: “The new styles are charmingly feminine and tend to make women appear taller and more graceful. They remind me, somehow, of the Gibson girl walking in a Greek garden. I have never gone without stockings. They enhance the beauty of the leg and hide the defects which so few of us ‘perfect stars’ are prepared to admit we have!”

NANCY CARROLL rebels in true red-headed fashion. ” I don’t like long skirts – period and I do not think I shall want to wear them. Not so for evening dresses but just think of all that catching of skirts in your heels as you hop on to a tram. I’m surprised that women are so docile about adopting this new fad. I intend to do my walking down Hollywood Boulevard in skirts measuring a good seventeen inches from the pavement!”

BESSIE LOVE likes the new styles so long as they are not carried to extremes. She thinks that “the day of the short skirt is past and that women, seeing the increased attractiveness of longer skirts, will wear them for a long long time. But, ” says Bessie, ” I don’t believe that the average woman who has been accustomed to the convenience of the short skirt will favor longer skirts for street wear. As for stockings, a sheer chiffon stocking is so much more attractive than a bare leg and I feel so much more feminine when wearing them anyway!”