Visit to Parisian Beauty Parlour in 1926 –

What is it about the beauty of French Women?

Travel the world over and you will find none so clever as the French woman in the art of beauty and make-up in the 1920s. This is the most definite impression left on my mind from my stay in Paris, where I had ample opportunity to study the beauty of the French woman and her mastery of make-up.

By her subtle use of cosmetics your attention is focused on her best features, those that express her varied emotions – her eyes and her mouth.

The Parisian is not so lavish as American women, in her use of rouge, for her skin is inclined to be a creamy olive, and she accents that charm with a powder that matches it closely in colour.
She applies this so evenly that the impression of softened, velvety texture is given rather than that whited sepulcher look which results when the powder used is lighter than the skin itself.

But when she does resort to rouge, again the French woman shows that she is mistress of the situation. The rose-leaf bloom on her cheeks seems to come and go, so realistically is it applied. After close observation I realized that this is partially obtained by the faintest touch on her chin and the lobes of their ears
You can depend on it: she never affects the hectic flush which proclaims the amateur, which makes so many men object to their wives using rouge or ” painting”, as they ruthlessly express it.

But why shouldn’t women, and especially wives, use rouge if they will learn to use it correctly, when it can only add to their charm., brighten their eyes, and apparently hold fleeting youth in check ?!
Experiment upon your own face ladies and you will be amazed at the effect you can achieve. If your face is too round, apply rouge high on the cheeks and back toward the ears, accenting the lobes of the ears if your coiffure exposes them to public view.
If however your face is thin, then place the rouge under the cheek bones straight down and rather close to the nose, being sure to accent the chin lightly.

In Paris I found a rouge made by Bourjois cosmetics. Is is a deep pink orange shade,which, when lightly applied to the skin, immediately changes from pink to orange , becoming the most natural shade imaginable. This rouge intrigued me. I bought some and experimented. No matter whether it was applied to the skin of a blonde or a brunette – it became the correct color for that apparent skin – a chameleon like cosmetic that seems to be affected by the skin itself.
So where can this amazing French rouge be bought ? Well – after arriving back in New York I had the wonderful good fortune to find the identical rouge made by a clever beauty specialist right here in the city. I could hardly believe my eyes, for when I had told her of my find in Paris, she left the room only to return with a golden container filled with a brilliant pink/orange paste !
This she applied to my cheeks and, amazed, I watched in the mirror, as my cheeks achieved the most natural glow. She explained that the color reaction was due to the acid secretions of my own skin.

So, it appears that cosmetics manufacturers are all competing to outwit the other in coming up with the new ultimate beauty product. Also the most attractive containers go a long way to deciding when to open your purse.So if your Christmas gift-list is long – do not forget to consider the double compacts, lip-sticks, and tiny pots of rouge. Bourjois and Dorin of Paris are a good choice of brands for all in one cosmetic cases.
As stocking gifts they make a delightful surprise, but be sure to select them for the individual for whom they are intended, for I know of no disapointment equal to that of receiving an attractive double compact, only to find upon opening it that the powder is too white for your complexion and the rouge too dark or of an impossible shade.

Compact, Paste and Liquid rouge for the fashionable Parisian.

The most amazing part of all the new brilliantly toned rouge offered to beauty seekers, is that a wee bit of then correctly applied produces a bigger feminine impact than the darker tones we are accustomed to.
Parisians prefer paste rouge to our powder rouge. It applies more evenly and gives a more natural tone than compact powder, with a thin film of powder dusted over. One popular brand, which is also taking New York by storm is Krasny.

Compact powder of the same shade can then be used from your handbag to touch up during the day at your nearest powder room.
Some Paris women also use liquid rouge, but this needs to be applied in a beauty parlor and certainly not attempted by the hasty amateur. Its effect however is dramatic and many fashionable women swear by it. It is luxury to have it applied and only a touch of powder to keep the skin tone even is required.

That most necessary of tools for any woman. Which of us would ever be without it?
In Paris, my eyes were often drawn to the beautiful mouths of its women. Subtlety is the key with Parisians, but the new shades are a dream ! Tangee is American, and is my lip palette of choice, but in Paris, it is not uncommon to find a small parlour experimenting with their own unique and luxurious lip colors, either in small dainty enameled pots, or the lipstick tube which we are now accustomed to. Bourjois cosmetics being the commonly seen brand of choice for women here.
Oranges,pinks,even a curious lime coloured lipstick caught my eye. Do not be overly tempted by attractive containers, but be sure that your lipstick is of the same general tone of your rouge. Have you not seen startling examples of orange-toned cheek rouge and a magenta lipstick or one that screams aloud for attention because of its brilliant red tone. Not so on a French woman; she knows her beauty shines out from all her facial aspects and an overtly pouting mouth is only for the stage or screen.

My Visit to a Beauty Parlour

The parlour I visited,  really takes the art of makeup seriously. They consider the skin as an artist would a blank canvas., and French women have that something or je ne sais qua , which I believe starts with the attention they give to their immaculate skin!

My beautician applied a rich cleansing cream which seemed to liquify my skin, followed by a deliciously refreshing tonic. This was followed by a smooth almost paste like foundation cream that left my skin in beautiful condition. As I sat there, a parade of beautiful women came and went around me, all unique in their personal choice of fashion ,hair and makeup. Suddenly I felt so plain and – well – American!

The new American rage of thinner than thin eyebrows was offered to me but I deferred, and settled for a slight thinning, a choice which my specialist evidently approved of.

Next came the orange like paste rouge I spoke of earlier which was a dream, then lipstick, which having someone else apply is always a luxury, and having a French woman apply it somehow makes it seem even nicer.
The final touch was my eyes. Lash conditioning ointment followed by a creamy concoction of light to dark brown cream which opened up my eyes and added real Parisian drama.
I left the parlour feeling ready to take on Parisian women at my best. I was loath to touch anything up that day.

At every restaurant and theater in Paris and at the important watering-places of Europe it was a simple matter to select the French woman from the crowd, for by their clever use of eye cosmetics they are known !
Their eyes seem to be larger, more brilliant, deeper set, and more mysterious than those of other races. They never gum their lashes together with eyelash liquids and call their eyes made up.

Oh no; eye make-up is more subtle for a French woman. I will admit, however, that much of that illusion is due to their clever use of shadows. Whether of the powder or paste variety, makes no difference.
To make the eyes appear larger, they draw a line from the outer edge of the eye with a tightly rolled paper pencil that usually accompanies their eye shadow compacts, using one of the many shades carefully selected to accent the natural shadows of the individuals skin. for instance, blue is used for very pale blondes, brown or bistro for the in-betweens, and black – oh so sparingly – for brunettes.

Personally I think that brown or tan is best for drawing this line and for a light dusting of the eyelids and accenting the lower lid. Lavender and blue may be used with great discretion.
Too prominent upper lids can be made much less so with the intelligent use of shadow compact powder or paste if you prefer it.
too light eyebrows should be accented with a darker-toned powder or pencil or ” crayon”, as it is called in Paris. Light eyelashes may be touched up with one of the water-proof liquids made for this purpose, but they should be brushed so, that the lashes do not stock together in bunches!

1920s Makeup – The correct color scheme for you.

All I have written may seem complicated, but really girls, it is not. It simply means that you should pay attention to your own particular color schemes in clothing and makeup. To be feminine is the key if you wish to emulate the French. Decide upon the right tone of paste rouge, then be sure that the lipstick and compact powder rouge are of the same general tone, and you will not go far wrong.
If you are in doubt as to the correct color scheme for your skin, then visit a good beauty shop and have the operator help you select the right color to enhance your natural complexion. if however you are not in the vicinity of such a shop, obtain a good beauty guide and start experimenting with various shades of rouge and lip color. One good method for finding the right rouge for you is to gently slap your cheeks till the blood rises, and then match that color with a rouge, it is also a clever way of knowing exactly where to apply rouge.
I have found that it is quite possible to use paste rouge on your lips too. Some women prefer liquid rouge for the lips, but unless it is applied very carefully.

You can download an original 1920s makeup tutorial as actually taught to women in the 1920s.

Learn the History of 1920s makeup 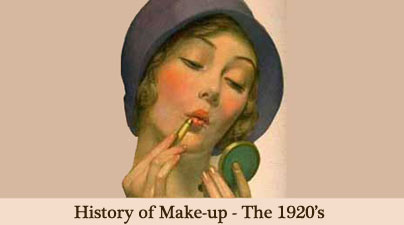