In 1906 – Model Evelyn Nesbitt causes a stir at her husbands murder trial – with her outfit! 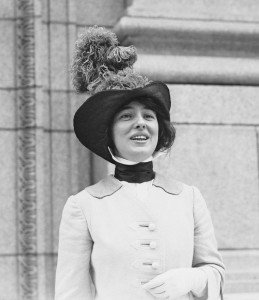 Evelyn Nesbitt – one of the 20th Century’s first style icons was a young model /actress thrust into the limelight in New York when her name was involved in the infamous murder of Stanford White, a respected architect in 1906.  He was sensationally murdered at point blank range in a theater by Harry Thaw – Evelyn’s jealous and psychotic husband.

The press quickly dubbed what followed as the Trial of the Century. Inside of the courtroom, spectators soaked up the seamy details of Evelyn’s seduction by Stanford White, while outside up to ten thousand were on standby for further gossip. Thaw was finally found guilty but insane.
Photographs of her court appearance outfit were so widely circulated that thousands of women eagerly ordered copy’s of her costume – a demure an innocent white corseted suit.

Like many Edwardian women, Evelyn was a product of her time, when women were second class citizens. She never quite caught the headlines again, despite an attempt at a film career, a long standing friendship and some say -love with actor John Barrymore. But her beauty as a young woman still glows from those early photos. Charles Dana Gibson purportedly used Nesbits profile and face for his illustrations of the “Gibson Girl“.