The 1930s ‘green evening gown’ in the film Atonement – worn by Kiera Knightly. 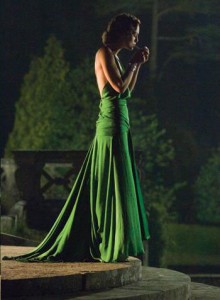 Ok – there are probably other ‘most beautiful dresses’ in films that could beat this one – Audrey Hepburn’s Givenchy dress in “Breakfast at Tiffany’s” for starters.
But that green dress worn by Kiera Knightly,designed by Jacqueline Durran  in the Oscar winning film –  Atonement, has been the subject of more fashion blogs that can be counted.
The author of Atonement – Ian Mc Ewan, had himself spent days on deciding the dress his heroine would wear to the all important dinner in his novel “” As she pulled it on she approved of the firm caress of the bias cut through the silk of her petticoat, and she felt sleekly impregnable, slippery and secure; it was a mermaid who rose to meet her in her own full-length mirror.”

So – Jacqueline Durran had some work on her hands. A unique design which draws at least some inspiration from Jeanne Paquin, whose draping silhouettes were a distinct trademark, and best worn admittedly by size ‘nothing’ women.

These are the basics components of it’s design.
1. Color – green – a popular enough shade in the 1930’s incidentally. Some serious work went into choosing just the hue of green of this beautiful dress.
According to Durran ” We searched London and found three green shades of silk; a lime green, a black and green organza and green chiffon.We took three swatches to a a master dyer and we ended up with a composite of those three green colors.” Then Costume Cutter/Designer Jo Van Schuppen instructed the fabric to cut with laser [ very 1930s ! ] by  Heritage Inlay.

So – a new hue of green basically – just for one dress. And it was worth it. Kiera Knightly swished about in true after dinner style, complete with lovers quarrels, tears, cigarettes on the balcony and upper class angst. The dress appears to change color in different scenes, because in a sense it does, due to it’s composite nature. Perfection.

The choice of color green is not new in film. Alfred Hitchcock was particularly fond of the color and had his costume designer – the great Edith Head, design several iconic outfits for his leading ladies Grace kelly – in Rear Window and Tippi Hedren – in the Birds. Likewise – Atonement director Joe Wright insisted on green.

Edith Head said that green tends to make viewers uncomfortable .[ but in a nice way of course if it’s worn by Grace Kelly or Kiera Knightly ].In Atonement the dress ends up as a character itself in the film, as it did in the novel, provocative and graceful.

To sum up the basic detail of the dress.
It is a floor length evening dress in emerald green silk, with a flowing bias cut bodice.

Fabric – Silk
Silhouette – A Line – princess with a wide waistline wrap which is gathered at the rear of the dress.
Neckline – V neck with spaghetti straps with a perforated bow detail.
Hemline and Train – Chapel Train
Skirt – straight cut circle skirt.

Yes – this is not the first post about this dress. Some serious film costume sites have it well researched and we heartily recommend viewing Clothes on Film – a dedicated film costume blog. The Costumers Guide gives a pretty good forensic examination of this dress,along with the gold cage front leather evening sandals that went with it.

Brilliant website for anyone interested in the art of film costumes. Celebrity Dresses – who specialize in reproductions of famous dresses had a pretty good go at recreating this design.

6 thoughts on “Most Beautiful Film Dress – Ever”